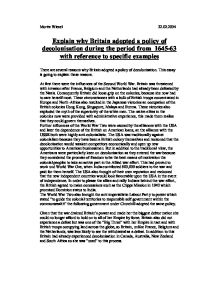 Explain why Britain adopted a policy of decolonisation during the period from 1645-63 with reference to specific examples.

Moritz Wiesel 22.02.2004 Explain why Britain adopted a policy of decolonisation during the period from 1645-63 with reference to specific examples There are several reasons why Britain adopted a policy of decolonisation. This essay is going to explain these reasons. At first there were the influences of the Second World War. Britain was threatened with invasion after France, Belgium and the Netherlands had already been defeated by the Nazis. Consequently Britain did loose grip on the colonies, because she now had to care herself most. These circumstances with a bulk of British troops concentrated in Europe and North-Africa also resulted in the Japanese victories an occupation of the British colonies Hong Kong, Singapore, Malaya and Burma. These victories also exploded the myth of the superiority of the white men. The native elites in the colonies now were provided with administrative experience, this made them realise that they could govern themselves. ...read more.

The World War Two also brought the anti imperialistic Labour Party to power which stated "to guide the colonial territories to responsible self government within the commonwealth" the following government under Churchill adopted the same policy. Given that the war drained Britain's power and made her the biggest debtor nation she could no longer afford to hold on to all of her Empire by force. Britain also did not experience a defeat but was one of the "Big Three" with her Empire in tact and with British troops occupying land across the globe, so Britain, unlike France, Belgium and the Netherlands, was less likely to see the withdrawal as a defeat. In addition to this Britain had already experienced decolonisation in Canada, Australia, New Zeeland and South Africa so she was "used" to this process. Furthermore there was the growing of Nationalist sentiment among the colonial people. ...read more.

Twenty seven of the first fifty one members of the UNO had been colonies this meant that there was always a majority in the general assembly hostile towards imperial powers. There also were some influences which disapproved to the decolonisation policy of the British the impacts of the cold war were that the western powers feared that the decolonisation could benefit the USSR. So there were arguments for decolonisation even for the sake of America such as the maintenance of empires provided Americas allies with political prestige and economic strength and provided the US with strategic bases as well as is prevented those territories falling under communist domination. Having examined all these points in conclusion it is to say that Britain adopted this policy of decolonisation because it could not afford to run her Empire anymore and the resistance among the people in the colonies and the Allies such as America grew. Although there were influences such as those by the cold war which were contrary to this policy Britain eventually gave independence to her colonies. ...read more.