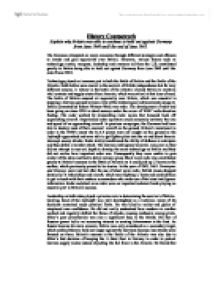 Explain why Britain was able to continue to hold out against Germany from June 1940 until the end of June 1943.

History Coursework Explain why Britain was able to continue to hold out against Germany from June 1940 until the end of June 1943. The Germans attempted on many occasions through different strategies and offences to invade and gain superiority over Britain. However, various factors such as technology, tactics, weapons, leadership and overseas aid from the U.S, contributed greatly to Britain being able to hold out against Germany from June 1940 until the end of June 1943. Technology played an immense part in both the Battle of Britain and the Battle of the Atlantic. Both battles were crucial in the survival of British independence but for very different reasons. A victory in the battle of the Atlantic allowed Britain to maintain vital contacts and supply routes from America, which was critical at that time of need. The battle of Britain ensured air superiority over Britain, which was essential in stopping a German ground invasion. One of the technological advancements unique to Britain (invented by Robert Watson-Watt) was radar. The development of radar had been going on since 1935 in dead secrecy under the cover of 'RDF' radio-direction finding. ...read more.

Churchill brought the nation together in a time of panic and crisis when Britain was under invasion. His passionate speeches about the bravery of British soldiers boosted the morale and courage of people during the Blitz. He introduced Lord Breaverbrook onto the scene of aircraft production because he realized the necessity for a high rate of industrial production, especially that of much needed fighter planes. Though anti-communist, he was pragmatic in quickly acknowledging Soviet Russia as a partner once Hitler had invaded. Churchill's role in gaining U.S support was vital as although he knew Britain would be able to resist Hitler's armies, complete victory would be impossible without financial aid, supplies and weapons from the U.S. British success in the Mediterranean was largely due to U.S grants and weapons. U.S Shermans were very powerful tanks, which more than matched their German counterparts. Churchill's invaluable knowledge as a military leader as well as prime minister made him realize that diplomatic ties with the U.S was necessary in coping with the German invasion. In terms of weapons, Britain had the upper hand in the Battle of Britain. Luftwaffe bombers were too small and they did not cause enough damage to their targets to put them completely out of action. ...read more.

(Including Belfast, Portsmouth, Hull, Plymouth and London). Their aim was to interrupt industrial production and undermine morale and they succeeded in doing so. However, in the long run, it was a necessary sacrifice as it gave time to the R.A.F to recuperate their forces, regain control of the skies and prevent any further invasion. British tactics in the Atlantic were to fight U-Boats and make sure convoys carrying vital supplies were not destroyed. Fortunately, from late 1941 onwards, British code breakers at Bletchley Park got better at decoding German codes. Breaking codes enabled them to know the whereabouts of U-Boats and so convoys could be guided away from the U-Boat wolf packs. Consequently, between May 1942 and May 1943, Britain managed to steer out of 175 convoys across the Atlantic without any interference from U-Boats. The success of Britain's tactics and the failure of Germanys' proved to be a key factor in Britain holding out against them. In conclusion, Britain's ability to hold out against Germany was partly due to U.S financial aid and material support, along with failure from the German tactics, Hitler's poor leadership and weapons. However, without Britain's tactical thinking, weapons and great leadership, it would never have been possible for them to keep their independence. ...read more.