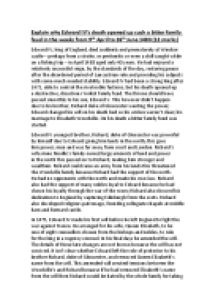 ﻿Explain why Edward IV?s death opened up such a bitter family feud in the weeks from 9th April to 26th June 1483 (12 marks) Edward IV, king of England, died suddenly and prematurely at Windsor castle ? perhaps from a stroke, or peritonitis or even a chill caught while on a fishing trip ? in April 1483 aged only 40 years. He had enjoyed a relatively successful reign, by the standards of the day, restoring peace after the disordered period of Lancastrian rule and providing his subjects with some much needed stability. Edward IV had been a strong king after 1471, able to control the rival noble factions, but his death opened up a destructive, disastrous Yorkist family feud. The throne should have passed smoothly to his son; Edward V. This however didn?t happen due to his brother, Richard duke of Gloucester wanting the power; Edward changed his will on his death bed so his wishes weren?t clear; his marriage to Elizabeth Woodville. On his death a bitter family feud was started. ...read more.

He arranged for his wife, Queen Elizabeth, to be one of eight counsellors chosen from the bishops and nobles, to rule for the king in a regency counsel. In his final days he amended the will. The details of these late changes are not known because the will has not survived. It isn?t clear whether Edward left the role of protector to his brother Richard, duke of Gloucester, and removed Queen Elizabeth?s name from the will. This amended will created tensions between the Woodville?s and Richard because if he had removed Elizabeth?s name from the will then Richard would be hated by the whole family for taking Elizabeth?s power and they would feel weak and threatened. However, Richard would have been threatened if Elizabeth was on the regency counsel then she would have power to choose who else would be on it, this would increase the Woodville?s power. Edward IV secretly married Elizabeth Woodville in 1464 without consulting either of his closest advisers, Warwick and Hastings. ...read more.