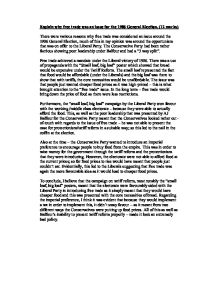 Explain why free trade was an issue for the 1906 General Election. (12 marks)

Explain why free trade was an issue for the 1906 General Election. (12 marks) There were various reasons why free trade was considered an issue around the 1906 General Election, much of this in my opinion was around the opportunism that was on offer to the Liberal Party. The Conservative Party had been rather factious showing poor leadership under Balfour and had a "3 way split". Free trade achieved a mandate under the Liberal victory of 1906. There was a use of propaganda with the "Small loaf, big loaf" poster which showed that bread would be expensive under the Tariff Reform. ...read more.

Furthermore, the "small loaf, big loaf" campaign by the Liberal Party won favour with the working /middle class electorate - because they were able to actually afford the food. This, as well as the poor leadership that was presented by AJ Balfour for the Conservative Party meant that the Conservatives looked rather out-of-touch with regards to the issue of free trade - he was not able to present the case for protectionism/tariff reform in a suitable way; so this led to the nail in the coffin at the election. Also at the time - the Conservative Party wanted to introduce an imperial preference to encourage people to buy food from the empire. ...read more.

To conclude, I believe that the campaign on tariff reform, most notably the "small loaf, big loaf" posters, meant that the electorate were favourably sided with the Liberal Party in introducing free trade as it simply meant that they would have cheaper food and this was presented with the core necessities of bread. Regarding the imperial preference, I think it was evident that because they would implement a tax in order to implement this, it didn't sway favour - as it meant from two different ways the Conservatives were putting up food prices. All of this as well as Balfour's inability to present tariff reform properly - made it look an extremely bad policy. ...read more.

Overall a good answer which highlights the key points well. This is a straightforward 12 mark 'Explain' question which should be written in about 12/15 minutes - bearing this in mind, it is important to keep to the main points and present them succinctly. This answer does that, but it would benefit from a little more focus on the contextual background to offer an understanding of how important this issue was becoming. Perhaps organising the factors into long and short term/immediate would be beneficial to demonstrate how the issue was increasing in importance over time. To reach higher levels, the answer would need to show the inter-relationship of the reasons given, for example linking the longevity of successful free trade policy with the prospect of
higher prices especially for food. While defence of free trade/opposition to tariff reform was central, there were other significant issues in the Election campaign such as Balfour