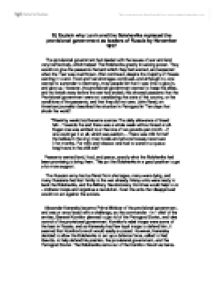 Explain why Lenin and the Bolsheviks replaced the provisional government as leaders of Russia by November 1917.

B) Explain why Lenin and the Bolsheviks replaced the provisional government as leaders of Russia by November 1917 The provisional government had dealed with the issues of war and land very ineffectively, which helped The Bolsheviks greatly in seizing power. They would not give the peasants the land which they had wanted, and expected when the Tsar was overthrown. War continued, despite the majority of Russia wanting it to end. Food and fuel shortages continued, and although no-one wanted to surrender to Germany, most people felt that it was time to give in, and give up. However, the provisional government wanted to keep the allies, and not break away before the war had ended; this showed peasants that the Provisional government were not considering the state of the country, or the conditions of the peasants, and that they did not care. ...read more.

The Russian army had suffered from shortages, many were dying, and many Russians had lost family to the war already. Many units were ready to back the Bolsheviks, and the Military Revolutionary Comittee would help to co - ordinate troops and organise a revolution. Even the units that disapproved would not act against the soviets. Alexander Kerensky became Prime Minister of the provisional government, and was at once faced with a challenge, as the commander - in - chief of the armies, General Kornilov planned to get rid of the Petrograd Soviet, and take control of the provisional government. Kornilov's rebel troops were some of the best in Russia, and as Kerensky had few loyal troops to defend him, it seemed that Kornilov's revolt would easily succeed. ...read more.