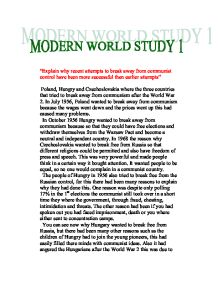 &quot;Explain why recent attempts to break away from communist control have been more successful then earlier attempts&quot;.

"Explain why recent attempts to break away from communist control have been more successful then earlier attempts" Poland, Hungry and Czechoslovakia where the three countries that tried to break away from communism after the World War 2. In July 1956, Poland wanted to break away from communism because the wages went down and the prices went up this had caused many problems. In October 1956 Hungry wanted to break away from communism because so that they could have free elections and withdraw themselves from the Warsaw Pact and become a neutral and independent country. In 1968 the reason why Czechoslovakia wanted to break free from Russia so that different religions could be permitted and also have freedom of press and speech. This was very powerful and made people think in a certain way it bought attention. It wanted people to be equal, so no one would complain in a communist country. The people of Hungry in 1956 also tried to break free from the Russian control, for this there had been many reasons to explain why they had done this. One reason was despite only polling 17% in the 1st elections the communist still took over in a short time they where the government, through fraud, cheating, intimidation and threats. ...read more.

Britain and France the western countries had depended on the Middle East for oil. The canal ran through Egypt and the oil was transported through the Suez Canal on its way to Europe. The Russians and Americans tried to gain influence of the Middle East and this had caused a crisis at the canal in 1956. Fortunately America had a choice of whether they would offer there support to their allies which where Britain and France or would they help Hungary and Poland which would risk upsetting Russia. The whole point of the summit meeting was to make better relations not worse so it would be a waste of time if relations had got worse. So America had decided to help their allies in Egypt. When in 1968 Russia had invaded Czechoslovakia, America was obviously shocked but still did not offer any support. The reason for America not wanting to offer their support was because just incase of upsetting the nuclear army talks, which had been held since 1963. Unfortunately the Suez crisis had got worse, and America didn't want to be in two places at the same time. The daily telegraph in 1989 had asked the following question " 1989 has there ever been a year like it?" ...read more.

Modern World Study 1 Conclusion. The countries, which had tried to break away from communism control in 1956 and 1968, were, Hungary, Poland, and Czechoslovakia. People in these countries disliked the Russians because Russia because Russia was a communist country. And ruled in 1956 and 1968. The Russians had sent in the red army to overcome the matter of facing economic problems, working hard and earning less. They literally hated the communist rules. The countries expected help from the west because of the Trueman Doctrine and Marshall Plan offered to help these countries who goes against the U.S.S.R The west did have their own reasons behind this promise, which was broken because the current leader, Joseph Stalin had died and the new replacement leader Gorbachev wanted to change the country so he did side with the west so they didn't wasn't to anger him in any way or act out of order before he signed the plan. In 1989 the countries in eastern European had achieved their independence, Russia didn't care to react, as it was far and busy with their own land. The main reason for the collapse of communism in Russia was the changes being brought about within Russia by President Gorbachev as he attempted to handle the countries economical problems. The reason why recent attempts were most successful is that Russia didn't do anything to stop them. ...read more.