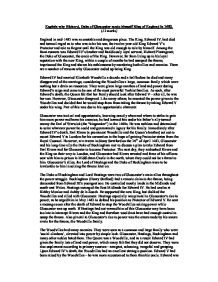 Explain why Richard, Duke of Gloucester, made himself King in 1483.

Explain why Richard, Duke of Gloucester made himself King of England in 1483. (12 marks) England in mid-1483 was an unstable and dangerous place. The King, Edward IV, had died and turmoil raged as to who was to be his son, the twelve-year-old King Edward V's Protector and rule as Regent until the King was old enough to rule by himself. Among the front-runners was Edward IV's brother and fastidiously loyal servant, Richard Plantagenet, the Duke of Gloucester, the uncle of the King. However, far from living up to his loyal reputation with the new King, within a couple of months he had usurped the throne, imprisoned the King and shown his ruthlessness by murdering both allies and enemies. There are a number of reasons why Gloucester ended up being King. Edward IV had married Elizabeth Woodville a decade and a half before he died and many disapproved of the marriage; considering the Woodvilles a large, common family which were nothing but a drain on resources. They were given large swathes of land and power during Edward's reign and came to be one of the most powerful Yorkist families. As such, after Edward's death, the Queen felt that her family should look after Edward V - after all, he was her son. ...read more.

He sent a message soon after the death of Edward to stop the Woodvilles seizing power while Gloucester was up north. If Hastings had not warned him of this Gloucester may have been too late to intercept Rivers and the King and therefore would not have had enough control to usurp the throne. Also pivotal to Gloucester's rise to power was the errors made by his sworn rivals for the throne, the Woodville family. The Woodvilles had many enemies. They were seen as a common and large family who were 'social climbers', elevated into power by simple luck. Gloucester, Hastings, Buckingham and many other nobles hated them. The Queen was a Woodville, and as a result Edward IV had given the family lots of land and power, which many felt that they did not deserve. They were also unpleasant according to primary sources - arrogant, scheming, vengeful and grasping. Upon Edward IV's death, the Woodvilles had an excellent strategic position. Edward V had been raised by the Woodvilles - he was more accustomed to them than his uncle. Edward was staying with Earl Rivers in Wales, whereas Gloucester was in Middleham Castle near Durham. Rivers also had the rights to move the Prince under armed guard and also to raise troops in the Welsh Marches. ...read more.

His cunning personality led to claims that Edward IV's sons were illegitimate. The late King had two sons; Edward, Prince of Wales and Richard, Duke of York. They were the rightful heirs to the throne, but both were now locked up in the tower. Many people were wondering what Gloucester intended to do. Late in June 1483, the friar Ralph Shaw held a sermon in London announcing that Edward's sons were illegitimate and therefore Gloucester was the rightful heir as the King's brother. This wasn't a rumour made up on the spur of the moment; rumours that Elizabeth Woodville had made Edward marry her through witchcraft had been around since the 1470s. Gloucester took full advantage of these rumours and Buckingham persuaded Parliament that it was true. They declared Edward's sons illegitimate and proclaimed Gloucester king. This was the final step in his master plan. So, in summary, many historians believe that the failure of the Woodvilles to capitalise on their strategic advantages was the key factor in Richard becoming King. If Rivers had left slightly earlier, Edward would be under Woodville control and Richard would probably have faded into insignificance as just another pretender to the English throne. Most historians consider that Richard's character itself, while somewhat important in that he took the initiative to seize the throne, was not that important, instead being superseded by his allies' roles and the fallacies of the Woodville faction. ...read more.