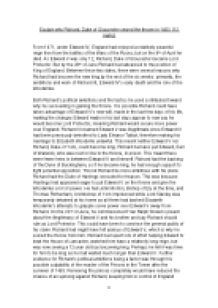 Explain why Richard, Duke of Gloucester seized the throne in 1483. [12 marks]

﻿Explain why Richard, Duke of Gloucester seized the throne in 1483. [12 marks] From 1471, under Edward IV, England had enjoyed a relatively peaceful reign free from the battles of the Wars of the Roses, but on the 9th of April he died. As Edward V was only 12, Richard, Duke of Gloucester became Lord Protector. But by the 26th of June Richard had advanced to the position of King of England. Between these two dates, there were several reasons why Richard had become the new king by the end of the six weeks: primarily, the ambitions and work of Richard III, Edward IV?s early death and the role of the Woodvilles. Both Richard?s political ambitions and the tactics he used contributed toward why he succeeding in gaining the throne. It is possible Richard could have taken advantage of Edward IV?s new will, made in the last few days of his life, making the changes Edward made in his last days appear to now say he would become Lord Protector, meaning Richard would secure more power over England. ...read more.

Richard had spent lots of effort helping Edward IV beat the House of Lancaster, watched him have a relatively long reign, but was now seeing a 12 year old boy becoming king. Perhaps he felt it was time for him to be king as he had waited much longer than Edward V. Further evidence for Richard?s political ambitions being a factor was through his possible culpability of the murder of the Princes in the Tower after the summer of 1483. Removing the princes completely would have reduced the chance of an uprising against Richard, keeping him in control of England more securely. Edward IV?s sudden death and the youth of Edward V gave Richard III an easier opportunity to gain power in the confusion after Edward IV?s death and the vagueness of the laws surrounding the rule of a minor. Edward IV?s death was sudden and unexpected. He fell ill in March of 1483 and died the next month. ...read more.

Edward V had been brought up almost entirely by members of the Woodville family. Gloucester feared the prince was more Woodville than York. When Edward V would become king, the Woodvilles could influence Edward to downgrade the position of his uncle. Richard executed Earl Rivers and some of his entourage including Sir Richard Grey. This proved his dislike of them and his perhaps justified paranoia that they were plotting against him. In conclusion, Edward IV?s early death was the most important way Richard III became king. This is followed by the tactics of Richard himself, and finally the role of the Woodvilles. Without Edward IV dying early, the rules of Edward V?s rule would have not been so murky, which allowed Richard?s plans to gain the throne to succeed, since he was Lord Protector. Richard?s dislike of the Woodvilles would not have caused usurpation alone; it was only with Richard?s own actions and the coincidence of Edward IV dying early that Richard could act on it. C ...read more.