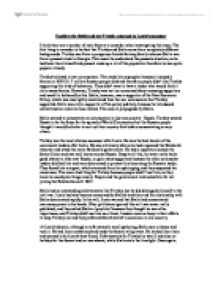 Explain why Stalin and not Trotsky emerged as Lenin's successor I think there are a number of main factors to consider when investigating this issue. The first thing to consider is the fact that Trotsky and Stalin come from completely different backgrounds. Trotsky was from a prosperous Jewish farming family whereas Stalin was from s peasant stock in Georgia. This meant he understood the peasants situation, as he had been there himself and peasant made up a lot of the population therefore he was quite popular already. Trotsky believed in war communism. This made him unpopular because it caused a famine in 1920-21. 7 million Russian people died and therefore people didn't like Trotsky supporting this kind of behaviour. They didn't want to have a leader who would think it ok to cause famine. ...read more.

They found him arrogant, which stemmed from his upbringing, and they suspected his cleverness. This was a bad thing for Trotsky because people didn't trust him, as they knew he could plan things wisely. People and the government mistrusted him for not joining the Bolsheviks until 1917. Stalin had no outstanding achievements like Trotsky, but he did distinguish himself in the civil war. Lenin had also become concerned by Stalin's ambition and his relationship with Stalin deteriorated rapidly. In his will, Lenin warned that Stalin had concentrated enormous power in his hands. Other politicians ignored this as it was never really published, and they called Stalin a 'grey blur' because they thought he was of no importance, and Trotsky didn't see him as a threat. Leaders were so busy in their efforts to keep Trotsky out and they preferred Stalin's belief in socialism in one country. ...read more.

He planned his bid for power carefully and he made great efforts to associate himself with Lenin wherever possible and got off to an excellent start at Lenin's funeral. He was also extremely clever in using his power within the communist party. Stalin took on boring yet important jobs in the government, which caused other leaders to call him a 'filling Clarke with virtually no significance'. Whilst doing these jobs, he used his position to put his own supporters into important posts and even transferred supporters of his opponents to remote postings. Stalin listened carefully to speeches by Lenin and other politicians and quoted back phrases. He twisted them round to make him seem better, and people believed him. This was another way that he manipulated situations. Therefore I believe that through clever propaganda and key events like Lenin's funeral Stalin rapidly gained supporters, and overtook Trotsky in the bid for ruler of Russia. ...read more.