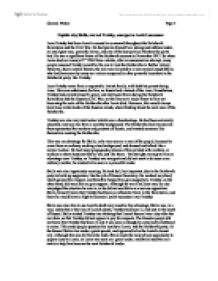 Explain why Stalin, and not Trotsky, emerged as Lenin's successor. Leon Trotsky had been Lenin's second in command throughout the Bolshevik Revolution and the Civil War. He had proven himself as a strong and ruthless leader, an intelligent man, powerful writer, and one of the best political thinkers the party had. He was a significant factor of the Bolshevik success in November 1917. So when Lenin died on January 21st 1924 from a stroke, after an assassination attempt, many people assumed Trotsky would be the one to lead the Bolsheviks to further victory. However, due to certain factors, the role was allocated to a man named Joseph Stalin, who had been seen by many as a minor compared to other powerful members in the Bolshevik party, like Trotsky. Leon Trotsky came from a respectable Jewish family, with both his parents being Jews. This was unfortunate for him, as Russia had a hatred of the Jews. Nonetheless, Trotsky had proved himself a great, and intelligent force during the Bolshevik Revolution and the Russian Civil War, so this was not a major factor to him not becoming the ruler of the Bolsheviks after Lenin died. ...read more.

Trotsky, on the other hand, did very little to gain support. Although he was a brilliant man, he also misjudged the situation he was in, as he did not see Stalin as a serious opposition. Stalin, himself, knew that Trotsky had been an influential force in the Revolution, and knew he would have to fight to become Lenin's successor over Trotsky. Stalin was also able to use Lenin's death very much to his advantage. Stalin was, in a way, lucky that at the time of Lenin's death, Trotsky had been ill, and sent to the south of Russia. Stalin tricked Trotsky into thinking that Lenin's funeral was a day after the real date, so that Trotsky did not appear to pay his respects. The Russian people did not know that Trotsky had been ill and it was seen as though he could not be bothered to come. This made people question his loyalty to Lenin, and the Bolshevik party. At the funeral Stalin also made a great speech, and appeared to be the Lenin's closest ally. Although this was far from the truth, Stalin made the most of any opportunity to appear close to Lenin, as Lenin was seen as a great leader, and Stalin used this as a tactic to help him become the next Bolshevik leader. ...read more.

Lenin was much more complimentary of Trotsky, saying that he is distinguished by his "outstanding ability", and is "the most capable man in the present Central Committee". Stalin knew that if the Testament were ever published it would have damaged all he had worked hard for, and support Trotsky's bid for leadership. So, with the help of two other Bolshevik members Kamenev and Zinoviev, who hated Trotsky, Stalin stopped the testament from ever being published in any newspapers, or books. With both Kamenev and Zinoviev in high positions in the Bolshevik party, Stalin had gained two very helpful supporters. All this meant Stalin had not only stopped his campaign from having criticism, but had also eliminated a key supporter of Trotsky's. In conclusion, as a result of Trotsky's arrogance, Stalin's skills and abilities were put aside, and he was not considered a threat until it was far too late. Stalin's deviance and ruthlessness helped him to eliminate the opposition, such as his clever funeral trick, and his views on Russian policies won over the Russian people. It is because of these factors, that Stalin emerged as Lenin's successor, and not Trotsky. Gemma Weber Page 3 ...read more.