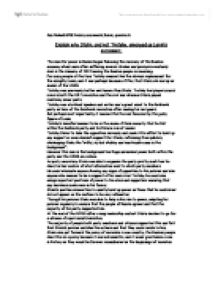 Explain why Stalin, and not Trotsky, emerged as Lenin's successor. The race for power in Russia began following the recovery of the Russian economy when Lenin

Sam Pedwell GCSE history coursework, Russia, question B. Explain why Stalin, and not Trotsky, emerged as Lenin's successor. The race for power in Russia began following the recovery of the Russian economy when Lenin after suffering several strokes and paralysis eventually died in the January of 1924 leaving the Russian people in mourning. For many people at the time Trotsky seemed like the obvious replacement for the almighty Lenin, and it was perhaps because of this, that Stalin did end up as leader of the USSR. Trotsky was previously better well known than Stalin; Trotsky had played crucial roles in both the 1917 revolution and the civil war whereas Stalin played relatively minor parts. Trotsky was a brilliant speaker and writer and a great asset to the Bolshevik party as hero of the Bolshevik revolution after leading his red guard. But perhaps most importantly, it seemed that he was favoured by the godly figure of Lenin. Trotsky's downfall seemed to be in the sense of false security that he felt within the Bolshevik party and his future role of leader. ...read more.

At the end of the 1920's after a long leadership contest Stalin decided to go for a scheme of rapid industrialisation. The majority of people both party members and citizens supported this and felt that Stalin's policies matched his actions and that they could relate to him. Stalin also put forward the policy of socialism in one country, the Russian people liked this as a policy because it was nationalistic, and it would give Russia a role in history as they would be forever remembered as the beginnings of socialism to which the rest of the world would follow. It also appealed to the peaceful side of the war torn Russian citizens who thought that such a policy would avoid the threat of war. This type of policy was much more appealing to Russia as a nation than Trotsky's policy of long term revolution and worldwide reform to communism, which would mean further war with other countries and money diverted from the people of Russia to support it. ...read more.

At Lenin's funeral Stalin made a speech confirming his "close and friendly relationship with Lenin". Stalin tried to associate himself with Lenin at every possible opportunity often having photos changed to picture the two together attempting to liken himself to the Russian people's idol, which he would use in his campaign of propaganda. Many of Trotsky's party members also feared his loyalty to the party and power within the party, and thought that he may use the might of his fearsome red army to start a dictatorship. It was both Stalin's strong political skills and the weaknesses of others around him that aided him in his rise to power, his ability to recognise an opportunity such as Lenin's funeral as a potential method of both promoting himself and demoting his opposition. He used his political skills to manipulate situations that had come about through luck; he changed his policies to fit in with the ideas of the times and played both the people of Russia and the politicians of Russia into accepting him as leader of the USSR. Sam Pedwell ...read more.