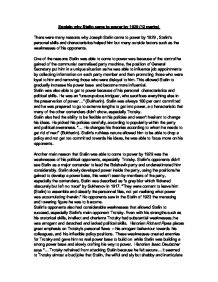 Explain why Stalin came to power by 1929

Explain why Stalin came to power by 1929 (12 marks) There were many reasons why Joseph Stalin came to power by 1929, Stalin's personal skills and characteristics helped him but many outside factors such as the weaknesses of his opponents. One of the reasons Stalin was able to come to power was because of the control he gained of the communist centralised party machine, the position of General Secretary put him in a unique situation as he was able to influence job appointments by collecting information on each party member and then promoting those who were loyal to him and removing those who were disloyal to him. This allowed Stalin to gradually increase his power base and become more influential. Stalin was also able to get to power because of his personal characteristics and political skills. He was an "unscrupulous intriguer, who sacrifices everything else in the preservation of power..." ...read more.

by members of the party, especially the contenders, Stalin was described as "a grey blur which flickered obscurely but left no trace" by Sukhanov in 1917. "They were content to leave him (Stalin) to assemble and classify the personnel files, not yet realising what power was accumulating therein." No opponents saw in the Stalin of 1923 the menacing and towering figure he was to become. Stalin's opponents also had considerable weaknesses that allowed Stalin to succeed, especially Stalin's main opponent Trotsky. Even with his strengths such as his oratorical skills, intellect and charisma Trotsky had substantial weaknesses; he was arrogant and detached and lacked political skills. Historian Richard Pipes places great emphasis on Trotsky's personal flaws - his arrogant behaviour towards his colleagues, and his inflexible policy positions. These weaknesses created enemies for Trotsky and gave him no real power base to build on while Stalin was building a strong power base and slowly crafting his way to power. ...read more.

Stalin was able to expose this 'loophole' and was able to get opponents, especially his closest one Trotsky expelled. There was also a growth in party membership around the years of the power struggle, many of these members were young, inexperienced and poorly educated. Many of these party members were easy to dominate and influence and were more likely to obey instructions than some older party members, Stalin was able to gain support from these members and build a stronger power base. In conclusion, Stalin was able to come to power by 1929 due to many outside factors which he cleverly influenced and manipulated like the positions he took up in the Bolshevik Party, the ban on factions, the inexperience of some of the party members and most especially the weaknesses of his opponents either on the right or the left. But Stalin also used his individual skills and characteristics to gain support and work his way to the top. ...read more.