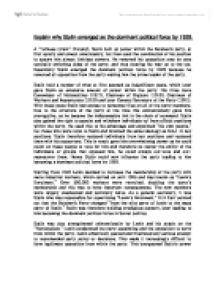 Explain why Stalin emerged as the dominant political force by 1929.

Explain why Stalin emerged as the dominant political force by 1929. A "ruthless tyrant" (Totsky), Stalin built up power within the Bolshevik party, at first quietly and almost unnoticeably, but then used the combination of his position to assure him almost limitless powers. He removed his opposition step by step tactically switching sides of the party, and thus clearing his way up to the top. Essentially Stalin emerged the dominant political force by 1929 because he removed all opposition from the party making him the prime leader of the party. Stalin held a number of what at first seemed as insignificant posts, which later gave Stalin as extensive amount of power within the party. His titles were Commissar of Nationalities (1917), Chairman of Orgburo (1919), Chairman of Workers and Inspectorate (1919) and later General Secretary of the Party (1921). With these posts Stalin had access to personnel files on all of the party members. Due to the structure of the party at the time this unintentionally gave him prerogative, as he became the indispensable link in the chain of command. ...read more.

This made it increasingly difficult to form legitimate opposition from within the party. This bourgeoned Stalin's power as firstly he was a beneficiary of the attack on "factionalism" and the charge of "factionalism" provided him with a ready weapon for resisting challenges to the authority he had already began to exercise. This was one of the tactics employed by Stalin to secure him the next successor to Lenin. Due to these tactics Stalin emerged as the dominant political force by 1929. The party was divided among many issues with the New Economic Policy having the greatest significance. Those who were critical of the NEP were branded left communists and those who accepted that as long as the NEP continued to meet the nation's food needs then it should be preserved, were branded right communists. Stalin's view was that a rivals attitude towards the NEP might be weakness to be exploited; if it could be established that his views indicated deviant Marxist thinking it becomes possible to undermine, if not destroy, his position within the party. ...read more.

He introduced a criminal law causing the concealment of grain to be a crime. He sent soldiers into the countryside to punish the peasants, This led to fighting in some areas and Bukharin in result denounced Stalin as a "tyrant." Bukharin and his followers were condemned as "right-wing deviationists." At the end of 1928 Bukharin resigned as editor of 'Pravda' and along with Trotsky and Rykov they were expelled from the party. Therefore now Stalin had successfully removed the opposition from both sides of the party, filling the gaps in the party with his followers and in result leaving him as the only political force to rule the Soviet Union. In conclusion Stalin destroyed his opposition in order to leave him as the only obvious candidate to succeed Lenin as the leader of the Bolshevik Party. Stalin rose to power using his strategic position as the General Secretary to his advantage. The structure of the party also benefited him as his actions did not seem to be that significant in his fight for power at first hand and therefore hiding him from condemnation. ...read more.