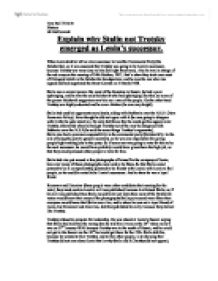 Explain why Stalin not Trotsky emerged as Lenin's successor

Explain why Stalin not Trotsky emerged as Lenin's successor. When Lenin died he left no clear successor to lead the Communist Party (the Bolsheviks), so it was assumed that Trotsky was going to be Lenin's successor, because Trotsky was very close to him (his right hand man). Also he was in charge of the red army on the evening of 24th October, 1917, that's when they took over most of Petrograd which is the Bolsheviks headquarters, and he was the one who also signed and had negotiated the Brest-Litovsk on 3 March 1918. Stalin was a normal person like most of the Russians in Russia, he had a poor upbringing, and he was the only Bolshevik who had upbringing like that, so some of the poorer Bolshevik supporters saw him as a man of the people. ...read more.

Stalin had also put around a few photographs of himself in the company of Lenin, how ever many of these photographs were said to be fakes. So that Stalin could pretend to be in companionship (pretend to be friends with Lenin) with Lenin to fool people, so he could be voted to be Lenin's successor. And to show he was a loyal friend. Kamenev and Zinoview (these people were other candidates that running for the vote.) they made certain Lenin's will was published, because it criticised Stalin, so if his will was published then Stalin would have lost votes then most of the Bolshevik voters would know that many of the photographs Stalin put around were fakes then everyone would know that Stalin was a liar, and to show he was not a loyal friend of Lenin, but Kamenev and Zinoview, did this (published his will), because they did not like Trotsky. ...read more.

People were afraid that Trotsky would involve the USSR into new conflicts, and because he thought (agued) that the future of the USSR lay in trying to spread permanent revolution across Europe and the world until the whole was communist, because he was so arrogant. But Stalin argued in approval of ''socialism in one country'' which he was saying the opposite of what Trotsky was saying. People were afraid of Trotsky (disliked him) by most of the senior members of the communist party he failed to realise that he needed them to support him when they voted for one of them for a new successor. He also suffered, because he was highly educated and he was a he was very bright person unlike most of the people in Russia. Also was a Jewish person, and Russia was anti-semetic ?? ?? ?? ?? Tom Bell 10 DJB History Mr McCormick ...read more.