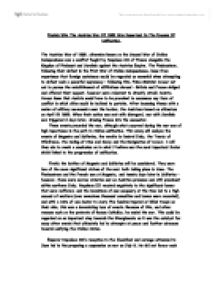 Explain Why The Austrian War Of 1859 Was Important In The Process Of Unification. The Austrian War of 1859, otherwise known as the Second War of Italian Independence was a conflict fought by Napoleon III of France alongside the Kingdom of Piedmont and Sardinia against the Austrian Empire. The Piedmontese, following their defeat in the First War of Italian Independence, knew from experience that foreign assistance would be regarded as essential when attempting to defeat such a powerful supremacy - following this, Prime Minister Cavour set out to pursue the establishment of affiliations abroad - Britain and France obliged and offered their support, however were reluctant to directly attack Austria. Cavour knew that Austria would have to be provoked to commence any form of conflict in which allies would be inclined to partake. After incensing Vienna with a series of military movements near the border, the Austrians issued an ultimatum on April 23 1859. When their notice was met with disregard, war with Sardinia was triggered 6 days later, drawing France into the encounter. These events preceded the war, although what occurred during the war was of high importance in the path to Italian unification. ...read more.

Predictably, central Italy witnessed revolution shortly after these proposals. The Piedmontese felt criminally ignored and did not intend to abide by these enforced terms by any stretch of the imagination. Protests arose in Sardinia and Cavour himself resigned in disgust. While the terms agreed upon in Villafranca by Napoleon and Franz Joseph seemed set, they would need to be reaffirmed in the Treaty of Zurich in November to be properly asserted. This arrangement proved to be of no use in the end, as the Piedmontese occupied the central states in a revolt against the pending restoration of the previous monarchs, while the French and Napoleon remained out of this situation; showing no desire to involve themselves any further. Therefore, the French failed to comply with the terms of the treaty of Villafranca and the Austrians were left in a state of vexation and disappointment at this. In the end, the revolts succeeded and the nationalists were satisfied at the new terms that had been proposed - these involved the annexation of the central Italian states with the Kingdom of Sardinia. At the start, the outcome did not appear to be positive; however this can be conceived as a productive stride towards unification. ...read more.

Problems of a moderate degree of importance arguably include the Treaty of Villafranca, which sparked revolution but ultimately amounted to nothing - and Napoleon's disapproval of war, which opened the path to the treaty in the first case. More prominent complications were the rebellions in central Italy, which appeared to ease Napoleon III's stance on the treaty and the resignation of Cavour. Arguably the most pronounced problems were the defeat of Austria at Magenta and Solferino, and the ceding of Nice and Savoy - leading to Garibaldi's future expeditions in attempting to unify Italy. In conclusion, I believe that the battles of Magenta and Solferino were the most important phase which assisted Italian unification during the time of the Austrian War. If it were not for these battles, in particular that of Solferino, the events that followed would never have occurred, and other outcomes may have taken place - the Austrians may have contained their territory in the Italian states, further people may have been killed in other wars, or Garibaldi may never have had the chance or power to play such a remarkable role in unifying Italy - nor may another figure of such inspiration to nationalists have ever emerged. ...read more.