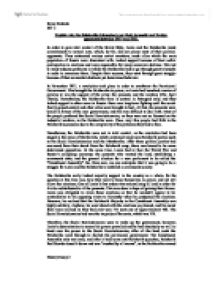 Explain why the Bolsheviks triumphed over their domestic and foreign opponents between 1917 and 1921.

Explain why the Bolsheviks triumphed over their domestic and foreign opponents between 1917 and 1921. In order to gain total control of the Soviet State, Lenin and the Bolsheviks made commitments to several acts, which, by far, did not please most of their political opponents. They mistreated various soviet members, made allies which the main population of Russia were discontent with, lacked support because of their unfair participation in elections and were responsible for many economic declines. This led to many arduous problems in which the Bolsheviks had to go through great triumphs in order to overcome them. Despite their success, they went through great struggle because of their somewhat obstinate yet determined behavior. In November 1917, a revolution took place in order to overthrow the Provisional Government. This brought the Bolsheviks to power, as Lenin had launched a series of policies to win the support of the army, the peasants and the workers (The April Thesis). Nevertheless, the Bolsheviks were in control in Petrograd only, and they lacked support in other areas in Russia- there was long-term fighting until the soviet finally gained control and other cities were brought to heel. ...read more.

The Subsequent problem to this, was how to withdraw Russia from the war with Germany. The Bolsheviks did not want to surrender, but were trying to negotiate with the Germans on terms to finish the war between them. The final decision was the peace treaty of Brest-Litovsk, which was an actual crisis for Russia, as it resulted in huge territorial losses. The Germans took all the land they had control of, including Finland, Turkey, Rumania. Poland, the Baltic States, Georgia and the Ukraine. Russia also suffered a vast loss of infrastructure; 26% population, 27% of its best farming land and 74% of its coal and iron ore. Lenin still insisted it was worth it because it gave the Bolsheviks the space they needed to deal with their opponents inside Russia. H Because of this, many officers in the Russian army wanted to get rid of the Bolsheviks as they blamed Lenin for giving in to the Germans. Instead of success, the Bolsheviks kept gaining more and more oppositions. Many Russians began to join the whites because they were against the way that Lenin was using the Cheka to deal with his opponents and censored non-Bolshevik newspapers. ...read more.

It began to bring back 'kulaks' who were wealthier than the peasantry. There was a large amount of unemployed people in Russia. There was also lack of modern technology due to the use of old machinery and old farming methods when it came to the manufacture of food and industrial outputs. Also, prices of food and goods became high in NEP Russia, causing groups of more developed people, who have more money. This totally contradicted the ideal of communism. Basically, the introduction of the NEP conveyed Lenin's failure to get rid of capitalism. Overall, the Bolsheviks did go through triumph, mainly because of Lenin's various stubborn and determined decisions. We must acknowledge their good will for obedience and patience with Lenin and communism, for it did actually work out in the end (for a short while). Because of Lenin's faith for communism in Russia (USSR), he was faced with many problems which he and his people had to struggle to overcome, but were fortunately successful in the end. 1 Mastering modern world history- pg 310- "How successfully did the Bolsheviks deal with their problems?" 2 Lenin's Russia- Mr. Crowther's notes 3 'RUSSIA' - War Communism (Mr. Crowther's notes) 'Lenin's Russia' page 22-23 4 www.wikipedia.com- Lenin and the Bolsheviks Reina Hashash IB1-2 History Essay 2 ...read more.