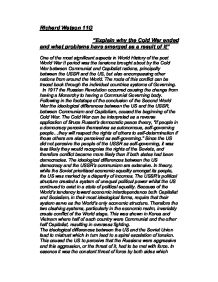 &quot;Explain why the Cold War ended and what problems have emerged as a result of it&quot;.

Richard Watson 11G "Explain why the Cold War ended and what problems have emerged as a result of it" One of the most significant aspects in World History of the post World War II period was the tensions brought about by the Cold War between Communist and Capitalist nations, principally between the USSR and the US, but also encompassing other nations from around the World. The roots of this conflict can be traced back through the individual countries systems of Governing. In 1917 the Russian Revolution occurred causing the change from having a Monarchy to having a Communist Governing body. Following in the footsteps of the conclusion of the Second World War the ideological differences between the US and the USSR, between Communism and Capitalism, caused the beginning of the Cold War. ...read more.

Therefore the two clashing systems, particularly in the economic realm, invariably create conflict of the World stage. This was shown in Korea and Vietnam where half of each country were Communist and the other half Capitalist, resulting in overseas fighting. The ideological differences between the US and the Soviet Union lead to mistrust which in turn lead to a spiral escalation of tension. This caused the US to perceive that the Russians were aggressive and this aggression, or the threat of it, had to be met with force. In essence it was the constant threat of force by both sides which defined the Cold War, and as has been proven, this perceived aggression largely derives from the conflicting ideologies of the two states rather than from the states themselves. During the Cold War period of 1945-1989 the whole of Europe became divided. ...read more.

From the Soviet perspective, the Bay of Pigs altercation was a US invasion of the island that needed to be addressed. What the Soviets perceived as an act of offence was intended to be a defensive restoration of a legitimate government from the reign of an aggressive dictator. The spiralling US-Soviet relations' regarding Cuba parallels the spiralling of tension in the Cold War. The end of the Cold War provides a final argument that ideologies were responsible for the period of tension between the super-powers. It was not until Mikhail Gorbachev established his plans for "perestroika" that the end of the Cold War became inevitable. By instituting reforms toward a market economy, individual liberties and democratic elections, Gorbachev moulded a Soviet ideology more closely aligned to the American ideology. With the ideological gap narrowed the factors that Russet articulated as causes for the "democratic peace" were able to act, deescalating and eventually ending the Cold War. ...read more.