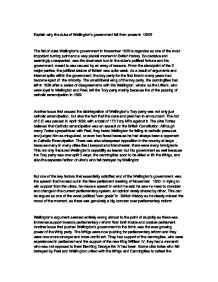 Explain why the duke of Wellingtons government fell from power in 1830?

Explain why the duke of Wellington's government fell from power in 1830? The fall of duke Wellington's government in November 1830 is regarded as one of the most important turning point and a very pivotal moment in British history. So decisive and seemingly unexpected, was the downward turn in the duke's political fortune and his government, meant is was caused by an array of reasons. From the standpoint of the 2 major parties, the political stature of Britain was quite weak. As a result of arguments and internal splits within the government, the tory party for the first time in many years had become apart of the minority. The small liberal wing of the tory party, the canningities had left in 1828 after a series of disagreements with the Wellington, whereas the Ultra's, who were loyal to Wellington and Peel, left the Tory party mainly because the of the passing of catholic emancipation in 1829. Another issue that caused the disintegration of Wellington's Tory party was not only just catholic emancipation, but also the fact that the duke and peel had to announce it. The Act of C.E was passed in April 1829, with a total of 173 Tory MPs against it. The ultra Tories believed that Catholic emancipation was an assault on the British Constitution, Although many Tories sympathised with Peel, they hated Wellington for falling to catholic pressure and judged him as misguided, or even two faced because he had always been a opponent to Catholic Emancipation. ...read more.

So the swing riots of 1830-1831 had begun. The significance of the agricultural disaster of 1830 and the swing riots, is that is can be argued as one of the initial steps which caused the rebellious and revolutionary attitudes of the people of Britain to grow. A crucial issue that almost caused a revolutionary climate in Britain between 1830-32 was the issue of parliamentary reform. Although changes had been made, like redistributing seats to more industrially centred places like Manchester and Leeds, so giving the middle class factory owners more political power and significance, the fact remained that house of Lords and the government as a whole, was still saturated with Aristocracy. The public were being let down and felt that the house of lords was clearly out of touch with the working and middle classes' wishes, and example of this was the rejection of the second reform bill by the Lords in 1831, which caused widespread anger throughout the country. Although many groups and coalitions were formed to support the great reform act, one of the most notable political societies' was the Birmingham Political union. The need for change, and so revolution can be clearly seen in formation of this union, as a crowd of over 15,000 arrived on it's first meeting. ...read more.

Britain was going through bleak times with a deteriorating economy and unemployment rate, and prominent cases of radicalism and violence. The public were being let down and felt that the house of lords was clearly out of touch with the working and middle classes' wishes: all these factors contributed to the urgent need of political reform, suggesting that to a certain extent that revolution was quite close, if the situation was left not dealt with any longer it probably would have occurred. However It must be said that Grey was speaking the truth when he said the bill was an aristocratic measure that was introduced to prevent the need for revolution. He was very clever in his methods of introducing a small amount of change to delay revolution, and restore order to Britain. Ultimately, aspects of the Whig party ensured that revolution could occur, on the face of it, it shows that they changed the political map forever, but in truth it was a limited, but clever change to preserve there current constitution. So in conclusion, I must say that although to a certain extent Britain had come close to a revolution, but the actions of grey and his Whig party in preventing revolution, meant that that to a slightly further extent Britain had not come close to a revolution. ...read more.