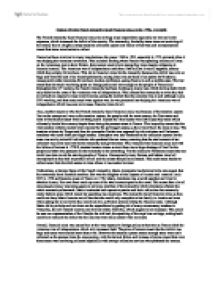 Explain why the French monarchy faced Financial crisis in the 1770s.

Explain why the French monarchy faced Financial crisis in the 1770s. (12 mark) The French monarchy faced financial crisis due to huge royal expenditure especially on war and court expenses, which increased the deficit of the country. The monarchy, funded by taxes were not receiving all the money due to a highly corrupt taxation collection system and failure of harvests and unemployment meant that taxes were harder to collect. France had been involved in many wars between the years 1740 to 1783, especially in 1776 onwards when it was helping the American revolution. This included funding where France was spending millions of livres on the Americans just to show Britain, their natural enemy how strong they were despite collapsing in financial turmoil. The American war of independence cost them 1066 million livres all together, money which they simply did not have. This led to financial crisis for the monarchy because the deficit was now so huge and from the lack of an elected parliament, raising loans was too hard of an option for Necker as consequently other countries did not have lenders confidence seeing France in such a terrible state. ...read more.

Instead the third estate were left to pay they taxes which ultimately funded the country despite them being the poorest estate in France. This inequality meant that the vital taxation reforms needed were rejected by the privileged estates as they would have the most to lose. The taxation reforms by Turgot and then his proceeder Necker was opposed by rich ministers and Parlement members who came from privileged estates. Corruption was also furthered as the collection system for the taxes was run by unlawful individuals who pocketed the tax money ensuring that the total amount of tax collected was never received by the monarchy and government. This worsened the financial crisis and with the failure of harvest in 1778/9, matters became worse as now there was a huge shortage of food for the people and there was pressure on the monarchy to do something. Yet the indecisive Parlement meant that not much was done to aid the starving people of France. ...read more.

Although Marie did try to help and cut down on the expenditure by getting rid of many unnecessary workers in Versailles, she still wanted luxuries and did not refrain from this, which angered a lot of people. This could be seen as a representation of the lifestyle the rich had; the spending of the royal was so huge, cutting back could have reduced the deficit but the cuts that were truly needed were not made. Overall, financial crisis was caused due to the very expensive foreign policy at that time as France aided the American war of independence which only increased debt. The price of honour meant that the deficit was huge and taxes were needed more than ever. However the taxation system meant enough taxes were not b collected as the poorest were the ones paying. And the harvest failure and increase of prices meant that even those taxes were not being collected especially with corrupt collection services who pocketed the money. ...read more.