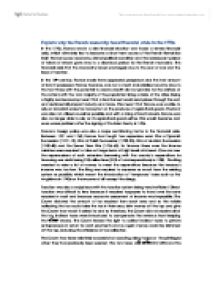 Explain why the French monarchy faced financial crisis in the 1770s

Explain why the French monarchy faced financial crisis in the 1770s In the 1770s, France was in a dire financial situation and faced a severe financial crisis, which ultimately led to become a short-term cause of the French Revolution itself. France's poor economy, dismal political condition and the subsequent period of failure of reform gave way to a disastrous period for the French monarchy. The financial crisis that the monarchy faced was largely due to the cost of war and the issue of taxation. In the 18th century, France would have appeared prosperous due the vast amount of land it possessed. France however, was not a much-industrialised country (due to the fact those with the potential to create wealth did not provide for the welfare of the nation) with the vast majority of the population living outside of the cities. ...read more.

One can see the repercussions of such extensive borrowing with the country's expenditure for financing war debt being 318 million lives (51% of total expenditure) in 1788. The King needed to raise a lot of money to meet the expenditure because the treasury's income was too low. The King was required to squeeze as much from the existing system as possible, which meant the introduction of 'temporary' taxes such as the vingti�me in 1740s on the income of all except the clergy. Taxation was also a major issue with the taxation system being very inefficient. Direct taxation was difficult to levy because it required taxpayers to hand over the sums required in cash and because accurate assessment of income was impossible. The Crown dictated the amount of tax required from each area and so the nobles collecting the tax could raise the tax in their area, skim money off the top ...read more.

France normally yielded around half of total tax revenue in times of peace and up to 60% in times of war (2 or 3 times that of the British). As a result of the inefficient taxation system, France was not able to gain enough income through taxes to meet the crippling war debts they were repaying. The French monarchy faced a dire financial crisis in the 1770s due to the country not being very industrialised, the crippling debts from four expensive wars and because of the inefficiency of the taxation system. Although France was relatively well off, its resources were locked up by the system of government, organisation of society and the attitudes of the ancien r�gime. Most of the 1st and 2nd Estate was exempt from taxation and so France was not able to match their expenditure and were plunged into a financial crisis with a large deficit to pay. ...read more.