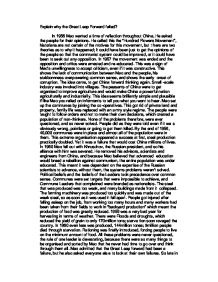 Explain why the Great Leap Forward failed? In 1956 Mao wanted a time of reflection throughout China, He asked the people for their opinions. He called this the "Hundred Flowers Movement", historians are not certain of the motives for this movement, but there are two theories as to why it happened; It could have been just to get the opinions of the people so that the communist system could be improved, or it could have been to seek out any opposition. In 1957 the movement was ended and the opposition and critics were arrested and re-educated. This was a sign of Mao's unwillingness to accept criticism, even if it was constructive. This shows the lack of communication between Mao and the people, his stubbornness overpowering common sense, and shows the early onset of corruption. ...read more.

This extreme organisation appeared a success at first, steel production practically doubled. Yet it was a failure that would cost China millions of lives. In 1960 Mao fell out with Khruschov, the Russian president, and so his alliance with him was severed. He removed his advisors, scientists and engineers from China, and because Mao believed that advanced education would breed a rebellion against communism, the entire population was under educated. This meant it was dependent on the expertise of the Russian scientists to advance, without them, the systems problems weren't solved. Political beliefs and the beliefs of the Leaders took precedence over common sense. Communes were set targets that were impossible to achieve, and Commune Leaders that complained were branded as nationalists. The steel that was produced was too weak, and many buildings made from it collapsed. ...read more.

So late in 1960 the Great Leap forward was abandoned, private land was reinstated and communes were cut down. The main failure of the Great Leap forward was the impossible feats asked of the communes, the targets they were set led them to produce unusable and wasteful equipment and materials that ended up more of a hindrance than help. If the targets were set lower and to a higher standard then it the country would have been far better off. Once again the greediness and over ambitiousness of human nature spoils the communist system. If Mao hadn't set such high demand for industry and not lost concentrated on the importance of agriculture and food production the country starvation problems would have been solved, fewer people would have died and a better foundation for a great nation would have been built. In total 30million people died through the simple mismanagement of workloads. ...read more.