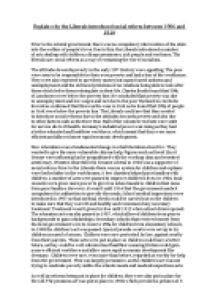 Explain why the Liberals introduced social reform between 1906 and 1914

﻿Explain why the Liberals introduced social reform between 1906 and 1914 Prior to the Liberal government, there was no compulsory intervention of the state into the welfare of people?s lives. Due to this, the Liberals introduced a number of acts dealing with children, old age pensioners, sick people and workmen. The liberals saw social reform as a way of containing the rise of socialism. The attitudes towards poverty in the early 20th Century were appalling. The poor were seen to be responsible for their own poverty and had a fear of the workhouse. They were also expected to save their money but many feared sickness and unemployment and the old faced problems of no relations being able to look after them which led to them retiring late in their life. Charles Booth found that 30% of Londoners were below the poverty line. He concluded that poverty was due to unemployment and low wages and not due to the poor themselves. Seebohn Rowntree confirmed that this was the case in York as he found that 28% of people in York were below the poverty line. The Liberals could see that they needed to introduce social reforms due to the attitudes towards poverty and also due to other factors such as the Boer War. ...read more.

Children were now, even more than before, regarded as worthy for help from the government. This was largely permissive, as the children?s act was not trying to eradicate poverty unlike the schools meals and medical inspections acts. As well as reforms being put in place for children, they were also put in place for the old. The pensions act was put in place in 1908, which provided a pension of 5 shillings a week for single people and 7s and 6d for a married couple. The Liberals set up this act for the old as it provided them with a pension for when they retired so that they didn?t have to fall back on relatives. The act disqualified people on moral grounds and the amount they received was based on their income. However, the level of benefit was low so only acted as a safety net. On the other hand, the act acknowledges that old age and health causes poverty and to get rid of poverty they need to help the old. They tried to combat poverty by giving the old a little help but with them also making their own provisions as they were also seen as worthy of support. ...read more.

Assistance of the government in finding work showed acceptance that external factors could account for poverty. National insurance also demonstrated understanding that cyclical unemployment existed and was not the fault of the unemployed. Overall, I feel that the Liberal government introduced social reform between 1906 and 1914 due to the levels of poverty. Other factors such as the Boer War and Britain?s industrial power decline also influenced the social reforms. Attitudes towards poverty began to change due to influential people such as David Lloyd George who sympathised with the working class. Poor were no longer seen as being responsible for their own poverty and poverty was seen to be due to social and economic factors outside of their control. As the acts were passed that helped children, the old and sick and the workers, the percentage of people below the poverty line decreased. Many acts, however, didn?t go far enough to be able to bring people above the poverty line. The impact of people such as Booth and Rowntree and their results raised the awareness of poverty in Britain. Many of the acts weren?t very effective in terms of the population and the number of people they helped. The Liberals shifted their outlook from a laissez ? faire system to a more collectivist approach and introduced social reform. ...read more.