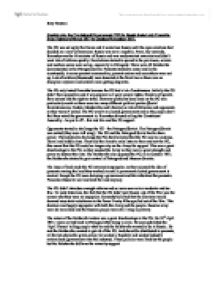 Explain why the Provisional Government (PG) in Russia lasted only 8 months from February/March 1917 to October/November 1917. The PG was set up by the Duma and it would run Russia until the open elections had decided on a new Government. Russia was now a republic. From July onwards, Kerensky was the Priminister of Russia and was moderate/not extremist and didn't want lots of reforms quickly. Revolutions started to spread in the provinces, soviets and workers union were set up, especially in Petrograd. There were 40 Bolsheviks (communists) in the Petrograd soviet. Peasants started to cease land in the countryside, in some peasant communities, peasant unions and committees were set up. Lots of soldiers (thousands) were deserted at the front line as there was no discipline anymore and soldiers were getting desperate. The PG only lasted 8 months because the PG had a lot of weaknesses. Initially the PG didn't face opposition and it was popular as it gave people rights; freedom of speech, form unions and the right to strike. ...read more.

The issue of land made the PG extremely unpopular; as they rejected the idea of peasants owning the land they worked on until a permanent elected government is elected. Except the PG were delaying a government and this infuriated the peasants. Peasants refused to wait and took the land anyway. The PG didn't introduce enough reforms and so were seen as too moderate and too few. To most historians, the fact that the PG didn't pull Russia out of the War was the reason why they were so unpopular. Kerensky believed that the Germans would demand very strict rules/terms in the Peace Treaty if they pulled out of the War. This decision was hugely unpopular with both the Army and the people. Russian army were de-moralised and the Russian people were still living in poverty. The return of the Bolshevik leaders was a great disadvantage to the PG. On 16th April 1917, Lenin arrived back in Petrograd after being in exile. He soon published the 'April Theses' telling people what he and the Bolsheviks wanted to do in Russia. ...read more.

Lenin judged to perfection the moment of maximum hostility towards Kerensky and the Provisional Government. The Bolsheviks knew exactly what they wanted, they were well disciplined and much better organised than all the other political groups. The revolution was quite a small scale affair. On 5th November, Trotsky announced the start of hostilities. Kerensky tried to take preventative measures e.g. closing down newspaper offices. On the night of 6 - 7th November, Red Guards took up key positions in Petrograd (post office, station, bridges, printers, waterworks etc. The Cruiser 'Aurora' was under Bolshevik control and it sailed up the River Neva and positioned itself facing the Winter Palace. Telephone links to the Winter Palace were cut off. The PG had no contact with the outside world. On 7th November, Kerensky left Petrograd, unopposed, hoping to gain the support of the front line. The Bolsheviks continued to take control of the city. By mid-afternoon only the Winter Palace wasn't in their hands. The Aurora fired a shell in the direction of the Winter Palace; this was a signal for the Red Guards to attack it. They attacked and came across little opposition. The PG surrendered without a struggle. ?? ?? ?? ?? Katy Penston ...read more.