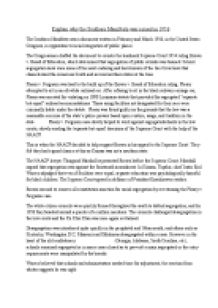 Explain why the Southern Manifesto was issued in 1956

﻿Explain why the Southern Manifesto was issued in 1956 The Southern Manifesto was a document written in February and March 1956, in the United States Congress, in opposition to racial integration of public places. The Congressmen drafted the document to counter the landmark Supreme Court 1954 ruling Brown v. Board of Education, which determined that segregation of public schools was banned. School segregation laws were some of the most enduring and best-known of the Jim Crow laws that characterized the American South and several northern states at the time. Plessy v. Ferguson was lead to the build up of the Brown v. ...read more.

Ferguson case slowly helped to work against segregatedschools in the low courts, slowly eroding the 'separate but equal' descision of the Supreme Court with the help of the NAACP. This is when the NAACP decided to help support Brown in his appeal to the Supreme Court. They felt they had a good chance at this as Kansas was not a southern state. The NAACP lawyer Thurgood Marshall represented Brown before the Supreme Court, Marshall argued that segregation was against the fourtennth amendment. In Kansas, Topeka; chief Justic Earl Warren adjudged that even if facilities were equal, separate education was psychologically harmful for black children. ...read more.

Desegregation was introduced quite quickly in the periphetal and Urban south, and others such as Kentucky, Washington D.C, Missouri and Oklahoma desegregated within a year. However in the heart of the old confederacy (Georgia, Alabama, South Carolina, etc), schools remained segregated or in some cases closed as to prevent/ remain segregated or the entry requirements were manipulated by the boards. Warren believed that schools and administrators needed time for adjustment, the reaction from whites suggests he was right. The signatories commited themselves to fight against the Brown descision, and thereby the Supreme Court. Eisenhower said the federal government had no power to intervene. Despite Eisenhowers opposition, Warren's Supreme Court struck a great blow against segregated schools with the Brown v. Board of Education case. ...read more.