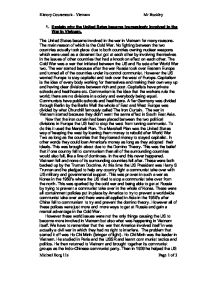 Explain why the United Sates became increasingly involved in the War in Vietnam.

1. Explain why the United Sates became increasingly involved in the War in Vietnam. The United States became involved in the war in Vietnam for many reasons. The main reason of which is the Cold War. No fighting between the two countries actually took place due to both countries owning nuclear weapons which were used as a deterrent but got at each other by involving themselves in the issues of other countries that had a knock on effect on each other. The Cold War was a war that initiated between the US and Russia after World War two. The war started because after the war Russia took over Eastern Europe and turned all of the countries under its control communist. However the US wanted Europe to stay capitalist and took over the west of Europe. Capitalism is the idea of every body working for themselves and making their own way up and having clear divisions between rich and poor. Capitalists have private schools and healthcare etc. Communism is the idea that the workers rule the world; there are no divisions in society and everybody being equal. Communists have public schools and healthcare. After Germany was divided through Berlin by the Berlin Wall the whole of East and West Europe was divided by what Churchill famously called The Iron Curtain. The war in Vietnam started because they didn't want the same effect in South East Asia. ...read more.

to unite the two halves after at the conference it was decided that Vietnam should be divided into two (North and South) along the 17th parallel. Then North however still provided support to communist groups in the south. The US then further involved them in Vietnam by appointing a corrupt puppet government to take control of the south. By doing this they would have an active part in the running of the south of Vietnam which would be allowing them to take shots at Russia to give them yet another further advantage in the cold war. The president of this corrupt government was a man named Ngo Ding Diem. This caused problems mainly because he was a catholic and the majority religion in Vietnam is Buddhist. He oppressed the Buddhists by not allowing them to celebrate Buddha's Birthday which caused Buddhist Monks the most famous of which is Quang Duc to Burn themselves in the streets as a form of protest. Then he came up with the bright idea (with US help) of creating strategic hamlets. These were villages set out in the countryside near the 17th parallel that were bordered off by fences. Diem thought that this would stop a guerrilla advance into the jungle but he was wrong. When the war came this allowed the fighters to gain access by working in the day and fighting at night. This also made Diem more unpopular due to the fact that people in the hamlets couldn't leave and do normal things such as go to the temple or visit their ancestors graves. ...read more.

This was when the US sent bombers to drop a blanket of bombs on North Vietnam to try to gain an advantage. It didn't work. LBJ wanted to end this, what he famously called 'A Bitch of a War', quickly so that he could focus governmental money on building his 'Great Society'. This was his plan to solve racism, poverty and poor education in the USA. He also wanted to end the war quickly so that the USA could 'Keep Face' and not loose their title as a super power due to loosing to such a small and underdeveloped country such as Vietnam. What LBJ didn't realise is that increasing US involvement due to the Cold War conflict between themselves and Russia was not a good idea. In the end the US lost to the North Vietnamese and looked like fools. They had wasted thousands of men's lives due to a point scoring contest in the cold war with Russia. They lost the war because they could only win a conventional war. What made them look even worse was the fact that the great nation of America had lost to a group of untrained, unprepared and inexperienced South-East Asian people. The north and south then united as one communist state and then the domino theory was proved wrong. After Vietnam fell communist not on other country around it fell communist after it. In the end it was just on big contest with the Russians in the Cold War and the Americans had lost terribly. History Coursework - Vietnam Mr Buckley Michael Borg 11s Page 1 of 3 ...read more.