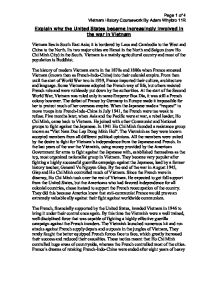 Explain why the United States became increasingly involved in the war in Vietnam Vietnam lies in South East Asia; it is bordered by Laos and Cambodia to the West and China to the North. Its two major cities are Hanoi in the North and Saigon (now Ho Chi Minh City) in the South. Vietnam is a mainly agricultural country and most of the population is Buddhist. The history of modern Vietnam starts in the 1870s and 1880s when France annexed Vietnam (known then as French-Indo-China) into their colonial empire. From then until the start of World War two in 1939, France imported their culture, architecture and language. Some Vietnamese adopted the French way of life, but others resisted French rule and were ruthlessly put down by the authorities. At the start of the Second World War, Vietnam was ruled only in name Emperor Boa Dia, it was still a French colony however. The defeat of France by Germany in Europe made it impossible for her to protect much of her overseas empire. When the Japanese made a "request" to move troops into French-Indo-China in July 1941, the French were too weak to refuse. Five months later, when Asia and the Pacific were at war, a rebel leader, Ho Chi Minh, came back to Vietnam. ...read more.

Diem received the United States full support, because he was Catholic and anti-communist. Diem refused to hold the election, as he believed North Vietnam would not allow free elections to take place. Now it looked that Vietnam was to remain split into two, opened up a lot of worrying problems to America. The North was getting stronger, but the South despite American support was getting weaker. The USA soon believed that the North would take over all of the country, and that all of Vietnam would become communist. The Americans thought that what was happening in Vietnam could happen at a much larger scale all over the world. The Domino Theory, as it was known, scared America as they thought that if lots of countries became communist, it would eventually get to America. Americans liked life how it was, and didn't want to follow the ideals of equality and communism. This helped the government in American start the war, as it had the full backing of the American people. America had to step in Vietnam as Diem was becoming disliked for being extremely harsh (he imprisoned 12000 of his own people) and his tactics for fighting the Vietminh were ineffective, for example 4000 South Vietnamese politicians were being assassinated each year and Diem could do nothing. ...read more.

In December 1964 there were 16,000 US troops in South Vietnam, 2 years on and this total had rocketed to 268,000 and in January 1968, it reached a peak at well over 500,000 troops. In Conclusion there were a number of factors that brought the United States into the war in Vietnam. There was the impact of the Cold War, where America attempted to keep foreign nations from becoming Communist. The ultimate fear America had of communism spreading throughout the world and trying to stop the Domino effect. The Failure of the Geneva Convention to halt Communism in Vietnam. The failure of President Diem and his weaknesses as a leader, which included the Strategic Hamlet Program which was a costly, complete failure and encouraged communism in South Vietnam and ultimately led to the founding of the Vietcong. And finally the Gulf of Tonkin incident, which escalated tension between America and North Vietnam. In my opinion the most important factor to why the US got involved in Vietnam was their fear of communism spreading throughout the world. If this hadn't been the case then America probably wouldn't have supported the French in their attempt to retake Vietnam and then wouldn't have gradually got involved with money and troops. ?? ?? ?? ?? Page 1 of 4 Vietnam History Coursework By Adam Whybro 11R ...read more.