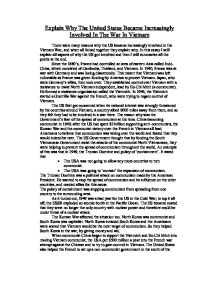 Explain Why The United States Became Increasingly Involved In The War In Vietnam There were many reasons why the US became increasingly involved in the Vietnam War, and when all linked together they explain why. In this essay I will explain all aspects of why the US got involved and then I will summarise all the points at the end. Since the 1880's, France had controlled an area of eastern Asia called Indo-China, which consisted of Cambodia, Thailand, and Vietnam. In 1940, France was at war with Germany and was losing disastrously. This meant that Vietnam was left vulnerable as France was given funding by America to protect Vietnam. Japan, who were Germany's allies, then took over. They established control over Vietnam with a resistance to make North Vietnam independent, lead by Ho Chi Minh (a communist). He formed a resistance organisation called the Vietminh. In 1946, the Vietminh started a Guerrilla War against the French, who were trying to regain control of Vietnam. The US first got concerned when its national interest was strongly threatened by the countries around Vietnam, a country albeit 9000 miles away from them, and so they felt they had to be involved in a war there. ...read more.

Ngo ruled as a dictator along with his brother - Nhu. Their government was corrupt and brutal but it was also backed by America. The USA supported Diem, the leader of South Vietnam by sending money, supplies and military equipment to his country. The National Liberation Front (or Vietcong) was set up in South Vietnam, 1960. It intended to: * Overthrow Diem, free South Vietnam from corruption. * Get rid of the Americans. * Reunite North and South Vietnam. Ho Chi Minh supported the Vietcong. The Ho Chi Minh trail was used to supply the Vietcong with weapons and food. It was the main route from North Vietnam. Also in 1960, John Fitzgerald Kennedy became President of the USA. He increased the number of military advisors from 100 to 1600 by 1963. He also helped to equip the South Vietnamese army. In 1961, the US spent nearly $270 million in military support for Diem. Kennedy did this as a result of the success the NLF was having, and since it was increasing its numbers. To "save" the peasants from the Vietcong, Diem organised a system whereby whole villages were moved into defended camps - known as fortified villages, or Strategic Hamlets. This policy did not work because the peasants did not want to be removed from their land. ...read more.