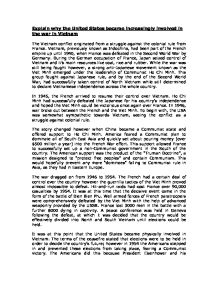 Explain why the United States became increasingly involved in the war in Vietnam The Vietnam conflict originated from a struggle against the colonial rule from France. Vietnam, previously known as Indochina, had been part of the French empire up until 1940, when France was defeated in the Second World War by Germany. During the German occupation of France, Japan seized control of Vietnam and it's main resources like coal, rice and rubber. While the war was still being fought however, a strong anti-Japanese movement known as the Viet Minh emerged under the leadership of Communist Ho Chi Minh. This group fought against Japanese rule, and by the end of the Second World War, had successfully taken control of North Vietnam while still determined to declare Vietnamese independence across the whole country. In 1945, the French arrived to resume their control over Vietnam. Ho Chi Minh had successfully defeated the Japanese for his country's independence and hoped the Viet Minh could be victorious once again over France. ...read more.

It was at this point that the United States became physically involved in Vietnam. The terms of the ceasefire stated that elections were to be held in order to decide the country's future; however in 1954 the Americans stepped in and prevented these elections from taking place, fearing a Communist victory. The Americans did this because President Eisenhower and his government were convinced that China and the USSR were trying to spread Communism throughout Asia. Vietnam was seen as the first domino in a row, which would inevitably bring about the communist take over of Laos, Cambodia, Thailand, Burma and possibly even India. The first attempt to prevent this came when America helped Ngo Dinh Diem set up the Republic of South Vietnam. The USA supported Diem because he was anti-communist and was willing to imprison or exile any acting communists in South Vietnam. Diem was a Christian, and treated Vietnam's many Buddhists with little respect. ...read more.

"Strategic Hamlets" where set up by American advisors who moved peasants away from their ancestral homes and into more secure areas, to the contempt of many locals. Kennedy's support continued to grow, however he was determined to not "blunder into war." Kennedy was assassinated in 1963, with his successor - Lyndon Johnson - more prepared to commit the USA to more extreme actions. He was willing to start a full-scale conflict in Vietnam if it were to prevent the spread of Communism. In August 1964, the US ship Maddox was fired on by North Vietnamese patrol boats in the Gulf of Tonkin. Because of this, American Congress passed the "Tonkin Gulf Resolution" which allowed Johnson the power to take "all necessary measures to prevent further aggression and achieve peace and security." In other words, the President could take the USA into a full scale war should he feel it was necessary. By March 8th 1965, this was the case. 3500 US marines arrived at Da Nang, just as "Operation Rolling Thunder" came into play. America's involvement escalated to war in Vietnam. ...read more.