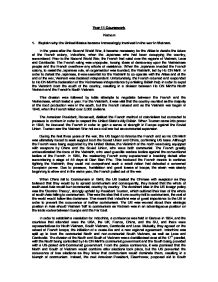 Year 11 Coursework Vietnam 1. Explain why the United States became increasingly involved in the war in Vietnam. In the years after the Second World War, it became necessary for the Allies to decide the future of the French colony, Indochina, when the Japanese who had been occupying the country, surrendered. Prior to the Second World War, the French had ruled over the regions of Vietnam, Laos and Cambodia. The French ruling was unpopular, forcing ideas of democracy upon the Vietnamese people and the French overthrew any efforts of resistance. When the Japanese invaded the French colony, to resist the Japanese rule, an organisation was founded, the Vietminh, led by Ho Chi Minh. In order to defeat the Japanese, it was essential for the Vietminh to co-operate with the Allies and at the end of the war, Vietnam was declared independent. Unfortunately, the French returned and responded to Ho Chi Minh's declaration of the Vietnamese independence by enlisting British help in order to expel the Vietminh from the south of the country, resulting in a division between Ho Chi Minh's North Vietnam and the French's South Vietnam. This division was followed by futile attempts to negotiate between the French and the Vietnamese, which lasted a year. For the Vietminh, it was vital that the country reunited as the majority of the food production was in the south, but the French refused and so the Vietnam war began in 1946, when the French killed over 5,000 civilians. The American President, Roosevelt, disliked the French method of colonialism but conceded to pressure to conform in order to respect the United State's Ally Britain. When Truman came into power in 1945, he favoured the French in order to gain a sense of strength in Europe against the Soviet Union. Truman saw the Vietnam War not as a civil war but as communist expansion. During the first three years of the war, the US began to finance the French and so Ho Chi Minh was ultimately forced to seek support from the Soviet Union and China, confirming US fears. ...read more.

Due to the fact that the US government were more interested in funding bombing projects such as "Operation Rolling Thunder", more bombs were dropped on Vietnam than on Germany in the Second World War, than helping the problems that faced the soldiers themselves, the army suffered greatly. Considering the lack of resources for the soldiers from low government funding, with the vast majority of the soldiers of low intelligence and little skill, it is not surprising that the US troops were ineffective against the accomplished Vietcong. The source talks of how "soldiers were most likely to die in the first month" and that "the large majority of deaths took place in the first six months", whereas it is well known that the Vietcong had seemingly endless supplies of soldiers, who would willingly die out of devotion to communism. In contrast, many of the American troops did not feel so strongly about the collapse of communism. A factor that the source does not mention is that of low morale. In addition to all of the problems encountered by the American soldiers as shown in the source, for example, high death rates, low intelligence and naivete, low morale would have played a vital part in the downfall of the US army. Factors such as guilt, resilience of the Vietcong, frustration at not being able to fight their enemy face to face, overreaction and defeatism would all have contributed to the low morale of the soldiers. At this time, drug abuse was rife within the army, popular due to its ability to provide escapism for the men. As well as having to fight the Vietcong, large numbers of the Southern Vietnamese were helping the Vietcong, leading to further frustration for the GI's. Due to the fact that the American soldiers were unable to distinguish members of the Vietcong from the South Vietnamese people, it lead to destruction of villages in the hope of killing at least a few followers of the Vietcong, causing the Vietnamese people to dislike the GI's even more. ...read more.

In his speech, he talks of the grave consequences of televising the war in the sense that not only would it shock the home audiences, witnessing daily the horrific events taking place in Vietnam but that it could possibly over-expose the was provoking anti-war movements. The source is a piece of primary evidence, and is seemingly unbiased, being more of a warning than anything. It was claimed that it was the televising of the war that made the Americans anti-war in the first place as during previous wars, people were fed propaganda in order to prevent anti-war movements. He also adds that by televising the war, the government are allowing their public to behold frequent atrocities, not only those inflicted on the Vietnamese people caused by their own army, but those that affected the soldiers also. As Robin Day quite rightly pointed out, "blood looks very red on colour television," meaning that for Vietnam to be the first televised war would not only be revolutionary in the fact that people would be witnessing it firsthand, but they would be observing the genocide taking place. The fact that this speech was presented in a seminar of the Royal United Service Institution, where members of the British armed forces would have been present means that although the statement could be warning that televising the war is a mistake, but also anticipating the rise of anti-war movements. In conclusion, I can say that there is sufficient evidence in the sources that explain the anti-war movements of the time. I believe that it was the televising of the war that prompted the initial anti-war schemes, but nevertheless, even if this had not been the case, I still believe that these movements would have existed. This is because of the fact that the American people did not want their soldiers fighting a war against a country of which they had no real dealings with. Even if the war had not been televised, it would still have been exposed in newspapers, magazines and cartoons, although understandably not to the same extent. ...read more.