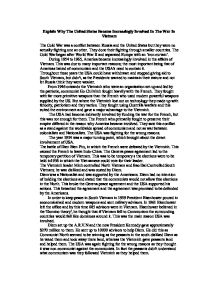 Explain Why The United States Became Increasingly Involved In The War In Vietnam The Cold War was a conflict between Russia and the United States but they were no actually fighting one an other. They done their fighting through smaller countries. The Cold War began after World War II and separated Europe with an 'iron curtain'. During 1954 to 1965, America became increasingly involved in the affairs of Vietnam. This was due to many important reasons; the most important being that of Americas hatred of communism and the USA's need to contain it. Throughout these years the USA could have withdrawn and stopped giving aid to South Vietnam, but didn't, as the Presidents wanted to maintain their stature and not let Russia think they were weaker. From 1946 onwards the Vietminh who were an organisation set-up and led by the patriotic, communist Ho Chi Minh fought heavily with the French. They fought with far more primitive weapons than the French who used modern powerful weapons supplied by the US. But where the Vietminh lost out on technology they made up with ferocity, patriotism and they tactics. ...read more.

This was the main reason USA was involved. Diem set up the A.R.V.N and the new President Kennedy gave approximately $270 million to them. He sent up to 10000 advisors to help Diem. He did this as Communist North seemed to be winning as the peasants in the south disliked Diem as he taxed them and took away there land, whereas the Vietminh gave peasants land and helped them. The USA was again fighting for the wrong reasons as they thought it was non-communist against the communists. In fact the peasants didn't understand what communism was they followed Vietminh as they helped them. The US government set up strategic hamlets, which was a costly failure they fortified selected villages, which they thought, could be most easily defended against the Vietminh (Vietcong). Then villagers were sent to live in them. These were very unpopular with the Vietnamese. The involvement upto 1963 by USA had cost 50 American lives and more than $400,000,000 for a corrupt government. The South Vietnams army wouldn't fight for their country and the Guerrillas ruled the countryside. The US had to get out or take control and win the war. ...read more.

On the 11th of February 1965 President Johnson made it clear that he thought 'Operation Rolling Thunder' would win the war. The plan consisted of bombing North Vietnam key military targets, such army barracks, bridges and cities in an attempt to bomb the Vietminh in to submission and stop communism in Vietnam and hopefully the Middle East. From 1954 to 1965 the Americans became increasingly involved due to fear, hatred, and the attempt to contain communism. At first America were indirectly part of the war; they gave financial aid and equipment to the South Vietnamese. They increasingly became involved when the prospect of communism endangered their 'Back yard'. The USA was dragged in to the war by their complete and utter hatred of Communism. The US thought the war was communism against nationalists where in fact it was between colonialists and Nationalists. The later part of the war consisted of two Nationalist parties who wanted power over Vietnam. America's tunnel vision saw the Vietminh led by a communist. This meant America would do any thing they could to defeat the Vietminh (communists). And that aim dragged them feet first in to the war they were fighting for the wrong reasons. ...read more.