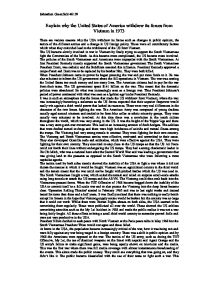 Explain why the United States of America withdrew its forces from Vietnam in 1973.

Explain why the United States of America withdrew its forces from Vietnam in 1973 There are various reasons why the USA withdrew its forces such as changes in public opinion, the tactics of the different armies and a change in US foreign policy. These were all contributory factors which when they coincided lead to the withdrawal of the US from Vietnam. The US became slowly involved in war in Vietnam by firstly trying to support the South Vietnamese fight the Communists of the North. As this became more complicated, the US became more involved. The policies of the South Vietnamese and Americans were unpopular with the South Vietnamese. At first President Kennedy merely supported the South Vietnamese government The South Vietnamese President Diem, was catholic and the Buddhists resented this influence. President Kennedy approved a coupe d'etait and Diem was to be replaced by his brother Nhu. They were both killed. When President Johnson came to power he began pursuing the war and put more funds to it. He was also reluctant to inform the US government about the full operations in Vietnam. The war was costing the United States too much money and too many lives. The American citizens had to pay for the war from their taxes. The US government spent $141 billion on the war. ...read more.

Whilst there were Human Rights abuses on both sides, the USA seemed to be committing them regularly. These were publicised all over the world. These showed the US soldiers committing atrocities such as the My Lai Incident in 1968 and made the public realise it was not a war being fairly fought. All these efforts to bring a small third world country to surrender proved futile and were not very productive in the USA. President Nixon decided to seek peace with North Vietnam at the Paris peace talks in May 1968 but the South Vietnamese President Thieu would not agree and these failed. At home in the USA, the population became increasingly critical of the war, how it was being run and were fully against any war being waged in a foreign country. There was a shift in public opinion and by 1968 the Americans were opposed to the war. The tactics of the US army, such as during the TET Offensive, My Lai, the use of chemical weapons on the forest with napalm and Agent Orange and the US army's failure to make significant gains, were being openly shown on television and the media. This was the first war where there was full media coverage with almost instantaneous broadcasting of the events. This alone made the public uneasy. ...read more.

Instead it would fund anti-Communists in their own countries and that the USA would not become involved with its own troops. This is seen in President Nixon's policy of 'Vietnamization', where the South Vietnamese population were to do their own fighting with US advisers. This was consolidated eventually in 1973 by Congress when it passed 'The War Powers' Act that limited the President's power to wage a war outside the USA. It was seen by the USA population and especially the US government that it had been humiliated in the eyes of the world and it had to extract itself from the mess. Nixon opened secret talks with the North Vietnamese and in 1975 Saigon eventually fell to the North Vietnamese because they lacked the support of the USA. It was the combination and the interaction between the different tactics of the armies, the media coverage, and the questioning of the war in the USA that led the USA to withdraw its troops from Vietnam. The change in approach to foreign policies and war by the USA meant that it no longer wished to become embroiled in such a war. This was to last until after September eleventh when it began an aggressive foreign policy but it has been careful not to become fully engaged in foreign countries for long periods because of the humiliation it suffered in withdrawing from Vietnam. Johnathon Greenfield 48139 ...read more.