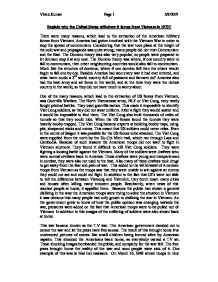 Explain why the United States withdrew it forces from Vietnamin 1973?

Explain why the United States withdrew it forces from Vietnam in 1973? There were many reasons, which lead to the extraction of the American Military forces from Vietnam. America had gotten involved with the Vietnam War in order to stop the spread of communism. Considering that the war took place at the height of the cold war and propaganda was quite strong; many people did not trust Communism and the East. The Domino theory was also very popular, so people were prepared to let Johnson stop it at any cost. The Domino theory was where, if one country were to fall to communism, then other neighbouring countries would also fall to communism. Much like the structure of dominos, where if one domino fell then the others would begin to fall one by one. Besides America had won every war it had ever entered, and what harm could a 3rd world country full of peasants and farmers do? America also had the best army and air force in the world, and at the time they were the richest country in the world, so they did not have much to worry about. One of the many reasons, which lead to the extraction of US forces from Vietnam, was Guerrilla Warfare. The North Vietnamese army, NLF or Viet Cong, very rarely fought pitched battles. ...read more.

Events like the My Lai massacre really horrified the general population. Pictures showing the sheer killing of innocent young people could have forced the withdrawal of American troops. The late 60s showed a real shift in public opinion. The Tet Offensive on the night of 31st January 1968 humiliated the government. The army and the public lost respect for their leaders and it lost all credibility. It became apparent to everyone that the USA couldn't win the war, and that they had been lied to by their government in order to make them believe that they were winning the war. The previous year, the Defence Secretary, Robert McNamara resigned saying that America couldn't win. This sent an extremely negative message to the army and the public, and they couldn't see why soldiers were still being sent in. Another example of government losing confidence was that of Johnson, previously one of the main supporters of the war, refused to stand for election. This shocked the world, and created yet more opposition to the war. America began to realise their unpopularity throughout the world. The Tet offensive came at a time when the US forces appeared to be winning the war. This made the shock even greater. Although Viet Cong losses were frightful, it was really a defeat for the US army. ...read more.

Such demands added to pressures to the government as they realised that the American public were deeply becoming more anti-war as they learnt more about what was being done to win the war. Therefore by the government being under pressure from the American public to end the war, this could have acted as one of the reasons to why American soldiers were withdrawn from Vietnam. It can be seen that the public opinion of the war and media coverage of the war played a very big part in why the American troops were withdrawn from Vietnam. America realised they didn't gain anything from their war with Vietnam. America had lost countless numbers of soldiers. Whereas others returned back home from Vietnam handicapped or mentally scarred. Towards the end of the war, American troops were deserting and America was fighting a bigger battle on two fronts. In addition to this America was ridiculed, as the situation was looked at as the defeat of a super power by one of the smallest and poorest countries in the world that supported communism. Also they failed to complete their main objective, to stop the spread of communism. This showed that it was now almost pointless to be fighting anymore, such thoughts started to affect government officials. American troops were withdrawn based on the fact that the war was now getting pointless, as neither enemy was willing to give up. Word Count = 1,733 words Vivek.Kumar Page 1 5/8/2007 ...read more.