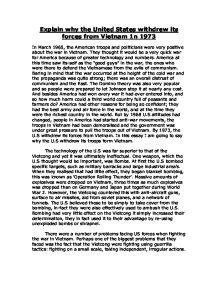 Explain why the United States withdrew its forces from Vietnam 1n 1973.

Explain why the United States withdrew its forces from Vietnam 1n 1973 In March 1965, the American troops and politicians were very positive about the war in Vietnam. They thought it would be a very quick war for America because of greater technology and numbers. America at this time saw its-self as the "good guys" in the war, the ones who were there to defend the Vietnamese from the evils of communism. Baring in mind that the war occurred at the height of the cold war and the propaganda was quite strong; there was an overall distrust of communism and the East. The Domino theory was also very popular and so people were prepared to let Johnson stop it at nearly any cost. And besides America had won every war it had ever entered into, and so how much harm could a third world country full of peasants and farmers do? America had other reasons for being so confident; they had the best army and air force in the world, and at the time they were the richest country in the world. But by 1968 U.S attitudes had changed, people in America had started anti-war movements, the troops in Vietnam had been demoralised and the government was under great pressure to pull the troops out of Vietnam. By 1973, the U.S withdrew its forces from Vietnam. In this essay I am going to say why the U.S withdrew its troops form Vietnam. ...read more.

By 1966, the Americans began a series of 'Search and Destroy Missions' in order to hunt down the Vietcong. The problem was that, by doing this, they began to loose the trust of, and 'alienated' the Vietnamese civilians. Chemical attacks were used such as petrol-bombs (napalm) and Agent Orange to burn down trees so the soldiers could see where they were going and whom they were attacking. It would have killed some of their opponents too. As a way of compensating for this, the Americans used the 'Pacification' policy, which was designed to 'win the hearts and minds' of the people of South Vietnam. This policy involved the US giving free dishwashers, washing machines, fridges, etc. to the Vietnamese, but these items were completely useless to them, as they had no electricity. The Pacification policy was a complete failure. The mid-sixties were also the period of Black Rights in America. Inspirational leaders such as Martin Luther King encouraged black people and in fact, many other white people across the world, to stand up for individual rights and justice. Many felt that the US was going against these beliefs by their actions in Vietnam. Proportionally, more black people were sent into Vietnam than white, despite the fact that they only made up 15% of the population. This was partly due to the wealth factor, as more white people could afford to defer the draft, and so the army ended up consisting of the poorer sectors of society. ...read more.

Also the war was also a great hindrance on America's economic stature. 13 percent of all government spending by 1968 was on Vietnam. This denied funds to America other needs such as hospitals, education and health. Black leaders such as Martin Luther King challenged the American spending, saying that they were neglecting the more pressing social issues, such as racism, social security and many other internal affairs that were bothering America at the time. This did not help win support for the war In conclusion there were military and political reasons for America's defeat in Vietnam. The military reasons for America's defeat in Vietnam were that the troops America were sending were inexperienced 18 and 19 year olds, but they were fighting experienced Vietnamese fighters. The Americans were used to open fighting with a set front line, but they were fighting in Jungles, in a different climate, and thousands of miles away from home. Another reason was that the American troops moral was very low, they didn't have anything to fight for, but the Vietnam troops were fighting for their country so they were more motivated to fight. The political reasons for Americas defeat were, amounting pressure from the public in form of the peace movement. Also the huge cost of the war was sending America into recession. Another reason was that the rising death count showed Americas lack of progress in Vietnam and this put pressure on the U.S to pull troops out of Vietnam. ...read more.