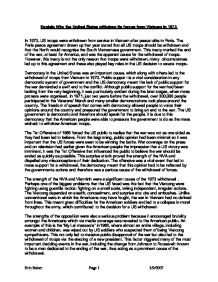 Explain Why the United States withdrew its forces from Vietnam in 1973 In 1973, US troops were withdrawn from service in Vietnam after peace talks in Paris. The Paris peace agreement drawn up that year stated that all US troops should be withdrawn and that the North would recognise the South Vietnamese government. This treaty marked the end of the war, at least for America, and was the apparent cause for the withdrawal of troops. However, this treaty is not the only reason that troops were withdrawn, many circumstances led up to this agreement and these also played key roles in the US decision to vacate troops. Democracy in the United States was an important cause, which along with others led to the withdrawal of troops from Vietnam in 1973. Public support is a vital consideration in any democratic system of government and the US democracy meant the lack of public support for the war demanded a swift end to the conflict. Although public support for the war had been lacking from the very beginning, it was particularly evident during the later stages, when mass protests were organised. ...read more.

This meant great difficulties for the American soldiers and led to a collapse in moral throughout the army, which contributed to the decision for a US withdrawal. The strengths of the opposition were also a serious problem because it encouraged brutality amongst the Americans which via media coverage was revealed to the American public. An example of this is the 'My Lai massacre' in1968, where almost an entire village, including women and children, was wiped out by US soldiers who suspected them of being Vietcong sympathizers. This not only led to massive public disapproval of the war but also led to the withdrawal of troops via the electing of a new president. This factor triggered many of the most important deciding events in the war, including the change from Johnson to Roosevelt: known to be a man dedicated to the ending of the war, thus acting as a prominent cause of the withdrawal. The arising of Nixon as president was an important cause of the withdrawal of forces from Vietnam. Nixon's success in the elections in 1968 was largely down to his promise to end the war. ...read more.

It was felt by the public that Americans were dying for no real reason and that the war was merely a waste of life, this widespread opinion meant the government had no choice but to withdraw troops. The lack of moral meant the army was not performing as well as it could so it was only a matter of time before the troops would have to be withdrawn. The peace talks were really only an excuse for the US to withdraw troops, by the end of the war it was widely felt that America should never have got involved. It was mainly down to public opinion because without support the US government could not justify prolonging the war. The democracy of the country was a necessary cause for public opinion to hold such a dramatic effect on the outcome, but the support for the end of a war was the vital cause. The rising of Nixon as president was merely an effect of public opinion and although an important cause would have been unlikely to occur if not for his campaign promises. All the causes stated contributed to troops returning to America but public support for a withdrawal was undoubtedly the most important cause. Erin Baker Page 1 5/9/2007 ...read more.