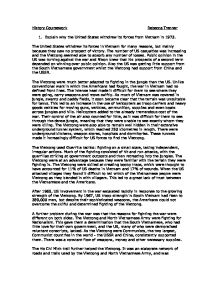 Explain why the United States withdrew its forces from Vietnam in 1973.

History Coursework Rebecca Trenner 1. Explain why the United States withdrew its forces from Vietnam in 1973. The United States withdrew its forces in Vietnam for many reasons, but mainly because they saw no prospect of victory. The number of US casualties was increasing and the Vietcong seemed able to absorb any number of losses. Public opinion in the US was turning against the war and Nixon knew that his prospects of a second term depended on winning over public opinion. Also the US was getting little support from the South Vietnamese government whilst the Vietcong had support from China and the USSR. The Vietcong were much better adapted to fighting in the jungle than the US. Unlike conventional wars in which the Americans had fought, the war in Vietnam had no defined front lines. The intense heat made it difficult for them to see where they were going, carry weapons and move swiftly. As much of Vietnam was covered in jungle, swamp and paddy fields, it soon became clear that the terrain was unsuitable for tanks. This led to an increase in the use of helicopters as troop carriers and heavy goods vehicles for moving guns, vehicles, ammunition, supplies and even boats across jungles and hills. ...read more.

An added problem was that, although the Government of South Vietnam was supposed to be working with the Americans, they did little to help with the war. The Government was corrupt, and so, South Vietnamese boys were never forced to help with the fighting - the Americans were forced to fight alone. American losses in the war (in terms of life and money) continued to rise. In November 1967, the Pentagon announced that total US casualties in Vietnam since the beginning of 1961 had reached 15,058 killed and 109,527 wounded. The president estimated the cost of the war to be approximately $25 billion per year. The US soldiers already had low morale because of the vast number of casualties, but adding to this was the fact that they knew that the war and their involvement in it was not supported back in America. The increasing numbers of casualties meant that public opinion back in the US was turning against the war. When the Vietnam War started only a small percentage of the American population opposed the war. Those who initially objected to the involvement in Vietnam fell into three broad categories: communists who wanted an NLF victory; pacifists who opposed all wars; and liberals who believed that the best way of stopping the spread of communism was by encouraging democratic, rather than authoritarian governments. ...read more.

Soon after taking office Nixon introduced his policy of Vietnamisation. The plan was to encourage the South Vietnamese to take more responsibility for fighting the war. It was hoped that this policy would eventually enable the United States to gradually withdraw all their soldiers from Vietnam. To increase the size of the ARVN, a mobilisation law was passed that called up all men in South Vietnam aged between seventeen and forty-three into the army. In June 1969 Nixon announced the first of the US troop withdrawals. The 540,000 US troops were to be reduced by 25,000. Another 60,000 were to leave the following December. In January 1973 the US, the two Vietnams and the Vietcong agreed a ceasefire and the last US troops were withdrawn in March. In conclusion the US withdrew from Vietnam for political reasons. Public opinion turned against the war when it became clear that both the casualties and the cost of the war were rising and that the US could not win the war. Nixon knew that the only way he could secure a second term in office was to end US involvement in the war. He tried to do this through the process of Vietnamisation but ultimately he wanted the troops out by any means. ...read more.