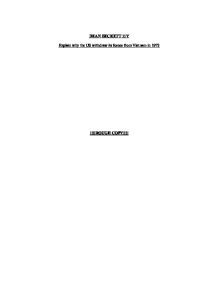 The media told of the suffering caused by the war, showed photo's of victims that were injured by the American bombs and told stories of what it was like in Vietnam, this made people realise that the war was not good and increased the peace movement. When people heard about events such as the My Lai massacre they turned against the war and the President even more and turned to the peace movement. The peace movement put pressure on the government to withdraw its troops and it put even more pressure on them when Vietnam veterans joined the peace protests. The government could not fight a war without the cooperation of the American people and this put pressure on them to withdraw troops. ...read more.

I think the withdrawal of American troops happened because of a combination of: the inability of the Americans to win the war, the pressure the peace movement applied on the government and President and the political situation of the US. The peace movement put pressure on the President and Nixon knew he couldn't run the war without the support of the American people. The Tet offensive made Nixon realise that his troops weren't trained to fight against guerrilla tactics and that they were unable to win the war. Nixon also couldn't just keep on sending in troops to fight when most of them died. Support was lost when the President used tax money to fund the war instead of providing or improving services. The US could not afford to run the war and so after the peace talks America had to withdraw troops from Vietnam. ...read more.