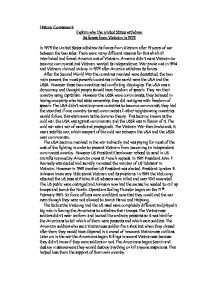 Explain why the United States withdrew its forces from Vietnam in 1973.

History Coursework Explain why the United States withdrew Its forces from Vietnam in 1973 In 1973 the United States withdrew its forces from Vietnam after 19 years of war between the two sides. There were many different reasons for this which all interlinked and forced America out of Vietnam. America didn't want Vietnam to become communist but Vietnam wanted its independence. War broke out in 1954 and Vietnam claimed victory in 1973 after America withdrew its forces. After the Second World War the countries involved were devastated, the two main powers, the most powerful countries in the world were the USA and the USSR. However these two countries had conflicting ideologies. The USA was a democracy and thought people should have freedom of speech. They ran their country using capitalism. However the USSR were communists, they believed in having one party who had state ownership, they did not agree with freedom of speech. The USA didn't want anymore countries to become communist, they had the view that if one country turned communist all other neighbouring countries would follow, this was known as the domino theory. This became known as the cold war, the USA was against communism and the USSR was in favour of it. The cold war was a war of words and propaganda. ...read more.

The American public began seeing images of burnt and deformed children and began questioning if what they were doing was right and the America began losing the support of their public. The Americans also used flamethrowers and sent planes to drop bombs all over the country. They began search and destroy mission were they searched for the Vietnamese soldiers in villages and burnt down any villages were any supplies or equipment was found. In March 1968 a major search and destroy mission took place, nine helicopter gun ships landed close to the Vietnamese village of My Lai. One platoon from the helicopters spent the next two hours killing, in cold blood, a large number of unarmed Vietnamese men, women and children. This was Know as the My Lai massacre. This was illegal the platoon should not have killed any innocent civilians. The news of the massacre became headline news 3 months later when it all flooded out. The American public were as horrified as the rest of the world and lost even more support in their country. The Vietnam War was affecting the American soldiers badly many did not want to fight and didn't want to be in Vietnam. The American soldiers weren't just killing the Vietcong soldiers but innocent people which was wrong and the soldiers and the public knew that something had to be done. ...read more.

However those troops left in Vietnam and also those at home having to live with what they had done took refuge in alcohol and drug abuse. Ever since the start of the war this had been one way of coping with the horrific nature of the war, the loss of close friends and the prospect of imminent death. When Soldiers returned and were awarded medals of honour many of them threw them away. In 1973 America withdrew its forces from Vietnam as both sides agreed to The Paris Peace Agreement, that stated US armed forces had to withdraw completely. Overall the war cost about 100,000,000 this caused taxes to rise and led to inflation. Since so much money was needed to pay for the war, US forces elsewhere were left short of men, money and equipment. All these reasons contributed to the withdrawal of the American soldiers. However, I think the most important reason for this was the role of the media. The media turned the American public against the war. They published pictures of burnt children saying that this had been done in their name. If the media hadn't covered the war then the American citizens wouldn't have known exactly what was going on and wouldn't have begun protesting against the war. The protests put extra pressure on the government to come to a peace settlement over Vietnam. ...read more.