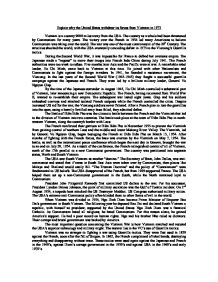 Explain why the United States withdrew its forces from Vietnam in 1973 Vietnam is a country 9000 miles away from the USA. The country as a whole had been threatened by Communism for many years. The victory over the French in 1954 led many Americans to believe Communism was taking over the world. The war was one of the most controversial of the 20th Century. The atrocities shocked the world, with the USA eventually conceding defeat in 1973 to the Vietcong's Guerrilla tactics. During the Second World War, it was impossible for France to defend her overseas empire. The Japanese made a "request" to move their troops into French Indo-China during July 1941. The French authorities were too weak to refuse. Five months later Asia and the Pacific were at war. A remarkable rebel leader, Ho Chi Minh, came back to Vietnam at this time. He joined with other Nationalists and Communists to fight against the foreign invaders. In 1941, he founded a resistance movement, the Vietcong. In the last years of the Second World War (1943-1945) they fought a successful guerrilla campaign against the Japanese and French. They were led by a brilliant military leader, General Vo Nguyen Giap. By the time of the Japanese surrender in August 1945, Ho Chi Minh controlled a substantial part of Vietnam, later announcing a new Democratic Republic. The French, having recovered from World War II, wanted to re-establish their empire. The subsequent war lasted eight years. Giap and his soldiers ambushed convoys and attacked isolated French outposts while the French controlled the cities. Despite increased US aid for the war, the Vietcong soldiers never faltered. After a French plan to lure the guerrillas into the open, using a heavily fortified army base failed, they admitted defeat. The Battle of �i�n Bi�n Phu was the climactic battle between the French and the Vietminh that led to the division of Vietnam into two countries. ...read more.

These young men were drafted into the armed forces as part of compulsory military service. They had to fight in unfamiliar surroundings, had no experience of rainforests and had no knowledge of the Vietnamese language or customs. To make matters worse, it was very difficult to identify the enemy. The VC might be a peaceful farmer during the day but by night a VC guerrilla. The effectiveness of Vietcong guerrilla tactics persuaded the US military to find a way of combining their technological power with some form of guerrilla tactics. Helicopters were used to "search and destroy," the speed of which gave the VC little warning. The helicopters could land troops close enough to VC controlled villages, to give the troops they were carrying the chance to attack before the Vietcong fighters had time to organise themselves. Search and Destroy also involved sending army units into the field to search for and kill any VC. The brutality and torture used on VC suspects was so horrific, many American soldiers suffered panic attacks and nightmares long after their return to the US. The ill-treatment of VC suspects did much to advance the Vietcong's efforts rather than harm them. President Johnson came into office in 1963 and his policy concerning the war was intensification, in order to end it. Operation Rolling Thunder which began February 11th 1965 was a joint military operation by American and South Vietnamese warplanes, on key military and industrial targets in North Vietnam. It was ineffective because safe areas were created which protected 80% of industry and 75% of population. Another tactic was Saturation Bombing (also called blanket bombing). Hi-tech American B-52 bombers were first used April 1966 to bomb everything in sight and this was even less effective than Operation Rolling Thunder. It strengthened the Communists' determination to resist and between 1965-68, 1400 US warplanes were shot down. From February 1965, to the end of all-out US involvement in 1973, South Vietnamese forces mainly fought against the Vietcong guerrillas, while US ...read more.

Inparticular, Vietnam was blamed for the massive drug problems in the USA in the 1970s and 1980s. Many people across the world were delighted to view Vietnam as a humiliating defeat for the most powerful nation on Earth. Vietnam was even blamed for increasing racial tension as many blacks believed their boys had done a disproportional amount of the fighting. US forces in Vietnam faced charges of war crimes for the dropping of 4 million tonnes of bombs on Vietnam, killing and disfiguring people with napalm and for using chemical weapons such Agent Orange. Nixon's doctrine led to the Vietnamisation of the Vietnam War. US troops would gradually withdraw from the conflict and the South Vietnamese Army would be trained to fight the war on its own. On 7 July, 1969, the first US troops started to go home. Vietnamisation did not end the war but it did reduce US losses. In 1972, the Communists launched a successful Easter offensive, but by September the well-equipped ARVN forced them back. The North Vietnamese government now realised it would not win a quick victory. The United States withdrew its forces from Vietnam because the Vietcong were a ruthless and effective enemy, particularly in fighting a Guerrilla War. They were prepared to keep fighting even when the Americans pulled off victories and inflicted high casualties. The South Vietnamese peasants disliked their own government and brutal treatment by the Americans meant they gave their support to the Vietcong. America's attitude in the war was strongly criticised by its own people and allies. America lost the will to fight. Expense, defeatism, conduct, broadcasts and protests meant that eventually the American people did not support the war and the American people are America so the war had to stop. Some historians claim that the US Army did not actually lose the war but were prevented from winning it by the attitude of politicians and the public. Finally though, President Nixon withdrew troops with his policy of "Vietnamisation." As for the US military, it would not be easily drawn into a Guerrilla war again. ...read more.