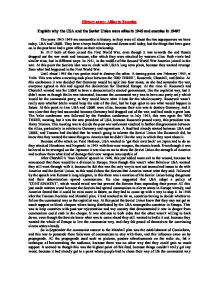 Explain why the USA and the Soviet Union were allies in 1945 and enemies in 1949?

History essay: Allies to Enemies Explain why the USA and the Soviet Union were allies in 1945 and enemies in 1949? The years 1945-1949 are memorable in history, as they were all about the two superpowers we have today, USA and USSR. They have always had their ups and downs until today, but the things that have gone on in the past have had a great affect on their relationship. In 1917 both of them joined the First World War, even though it was towards the end Russia dropped out the war weak and insecure, after which they were attacked by western allies. Both rivals had similar aims, but in different ways. In 1941, in the middle of the Second World War America joined in the war. At this point the Soviets idea was to clash with USA's long term plans, because they wanted revenge from what had happened in the First World War. Until about 1945 the two parties tried to destroy the other. A turning point was February 1945, at Yalta. This was when a meeting took place between the 'BIG THREE', Roosevelt, Churchill, and Stalin. ...read more.

After Churchill's 'Iron Curtain' speech in 1946, this just added more salt to the wound, because he announced that there would be a division in Europe. Even though this wasn't what Britain or USA wanted they still went through with it, because he felt this was the only way to sort out unresolved issues to do with America and the Soviet Union, as this would show the Soviets that America meant what they said. Followed by the speech was Kennan's long telegram, in this there was a mention of the Soviet Union being dangerous and their determination spread communism. He also suggested that USA adopt a policy of 'CONTAINMENT', which would avoid war but prevent the Soviets from expending their power. All this just made matters worst because the Soviets had spread communism to eleven states in Europe already, and America feared that it could be even more in future, so they had to come up with a way to stop it. In 1946 after the Truman Doctrine and Marshall plan, it had reached as far as, countries having to decide whether to follow the communist way or the capitalist way. ...read more.

Because of Stalin's actions many women and children starved, as there was no food, innocent people were suffering the consequence of his actions. This went on for about a year then ended in 1949, because Stalin acknowledged the failure of the blockade and allowed import and export lorries etc to drive through Berlin again. He had to open roads again because the main aim was to stop USA providing food, but they still managed to do so using airlift and other commodities. Finally in April 1949 NATO (North Atlantic Treaty Organisation) was established to provide protection to Western Europe by protecting the participating countries with Americas nuclear monopoly and was to enable economic recovery and resistance to internal subversion. Even though this wasn't a regular war people in Europe actually feared that it might have lead to World War Three and they would be in the centre of it. The cold war was a war of words between USA and USSR. It was based on indirect fighting. It was a war of ideology and competition for power. Eventually it ended, and as we know it today USA and USSR remained the tow super powers of the world. ...read more.