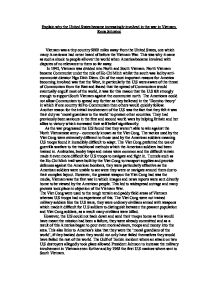 Explain why the USA became increasingly involved in the Vietnam war

Explain why the United States became increasingly involved in the war in Vietnam. Rona Johnston Vietnam was a tiny country 9000 miles away from the United States, one which many Americans had never heard of before the Vietnam War. This was why it came as such a shock to people all over the world when America became involved with disputes of no relevance to them so far away. In 1945, Vietnam was divided into North and South Vietnam. North Vietnam became Communist under the rule of Ho Chi Minh whilst the south was led by anti-communist dictator Ngo Dinh Diem. On of the most important reasons for America becoming involved was that the West, in particularly the U.S were aware of the threat of Communism from the East and feared that the spread of Communism would eventually engulf most of the world, it was for this reason that the U.S felt strongly enough to support South Vietnam against the communist north. The Americans could not allow Communism to spread any further as they believed in the 'Domino theory' in which if one country fell to Communism then others would quickly follow. ...read more.

However, the greatest weapon the Viet Cong had was the media, Vietnam was the first war in which images and news reports were sent directly home to be viewed by the American people. This led to widespread outrage and many protests took place in objection of the Vietnam War. The Viet Cong were used to the rough terrain and paddy field areas of Vietnam whereas U.S troops had no experience of this. The Viet Cong were not trained military soldiers like the U.S were, they were ordinary civilians armed with weapons which made it difficult for U.S soldiers to distinguish between the peasant population and Viet Cong soldiers, as a result many civilians were killed. However, the U.S could not back down and send their troops home as this would have meant the mission had been a failure, they were already committed and as a result of this America began to pour even more advisors, troops and money into the area. This also links to America's idea that they were the 'moral guardians of the world', if they backed down they would not only have failed themselves they would have failed the rest of the world. ...read more.

Napalm was used to devastating effects and many people were killed as a result of the effects caused by it. Because it was so difficult to distinguish between ordinary civilians and the Viet Cong soldiers U.S troops were instructed to carry out 'search & destroy' ground missions with the aim of killing as many Vietnamese people as possible regardless of whether they were military or not. The U.S troops aim was to win the 'hearts & minds' of the Vietnamese people however this proved impossible when they were continuously bombing villages and killing innocent civilians. In conclusion, the United States became increasingly involved in Vietnam for a number of reasons, the fear of Communism; the Domino theory and their own self belief being just few. However, the most important reason for the increased involvement was the American fear of Communism and their idea of 'containment'. The increased U.S involvement was due to the fact that they could not bear the thought of Communism taking hold of the West, so when U.S troops began to fail in their mission The U.S felt they had no other choice but to increase the amount of troops and money they were putting into the area. ...read more.