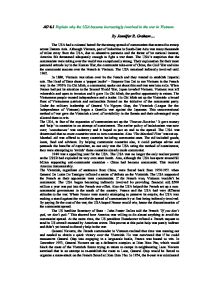 Explain why the USA became increasingly involved in the war in Vietnam.

AO 6.1 Explain why the USA became increasingly involved in the war in Vietnam. By Jennifer R. Graham... The USA had a colossal hatred for the strong spread of communism that seemed to sweep across Eastern Asia. Although Vietnam, part of Indochina in South-East Asia was many thousands of miles away from the USA, due to obsessive paranoia and the threat of its national interest, America felt threatened adequately enough to fight a war there. The USA's suspicion that the communists were taking over the world was exceptionally strong. Their explanation for their most paranoid attitude lay in the Korean War, the communist take-over of China, the Cold War and also the communist success over the French in Vietnam. The USA remained indirectly involved until 1965. In 1880, Vietnam was taken over by the French and they wanted to establish Imperial rule. The Head of State chose a 'puppet leader' - Emperor Bao Dai to run Vietnam in the French way. In the 1930's Ho Chi Minh, a communist, spoke out about this and was sent into exile. When France had put its attention to the Second World War, Japan invaded Vietnam. Vietnam was left vulnerable and open to invasion and it gave Ho Chi Minh, the perfect opportunity to return. ...read more.

Diem presided over an increasingly corrupt, nepotistic and oppressive regime and being born into an aristocratic, Roman Catholic family he hated communism in every respect. This was because communists were against religion. This is the only reason why the USA wholly supported Diem - he despised communists. The USA sent Diem money, supplies and military equipment. The year following the cancelled elections saw a large increase in the number of people moving north to communism. As a result, 80 000 guerrillas in South Vietnam who opposed the anti-communist regime there united to form the 'National Front for the Liberation of Vietnam,' a terrorist campaign better known as the Vietcong. The Vietcong were trained in guerrilla warfare. Their aim was to take the south and infiltrate the villages in an attempt to gain support to turn them communist. In a response to the defeat of the French by the Vietminh at Dien Bien Phu, in 1954, President Eisenhower outlined what became known as the Domino Theory. Basically he was describing the spread of communism by using the picture image of a row of dominoes. You knock the first one and then one by one they all fall. If one country fell to communism, then the others would fall, like a row of dominoes. ...read more.

The explanation to this lies in the fear caused by the spread of communism at the time. They became increasingly involved in Vietnam's affairs because of the paranoia over the recent communist take-over of China, the Korean War, the communist victory over the French in Vietnam and the Cold War. The climate was already set and the recent events added to the suspicion which made the USA even more desperate to want to stop communism in Vietnam. In 1954 the US involvement considerably increased when France withdrew from Vietnam. The USA intervened with the Geneva Agreement and persisted with the ever-growing indirect aid given to South Vietnam. The USA after France's withdrawal began to send in more and more military advisors and they knew that the only solution to help overthrow the Vietcong was to increase drastically their involvement with more equipment, more advisors, more supplies. Even better, they could directly involve themselves in the war. All the USA needed was a justified reason to transform their indirect involvement to involvement of a direct nature. Their excuse came in 1965 when the Vietcong infiltrated and attacked the US base of Pleiku. Finally, the USA's initial indirect involvement over the years proved to be of no help whatsoever. It became purely an immense mistake; with huge financial investments wasted. Despite all the time, money and effort spent, the domino effect had already begun and all that America had done had proved pointless. ...read more.