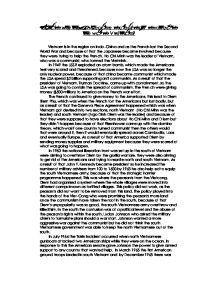 Explain why the USA became increasingly involved in the war in Vietnam?

Explain why the USA became increasingly involved in the war in Vietnam? Vietnam is in the region on Indo-China and as the French lost the Second World War and because of that the Japanese became involved because they were trying to help the French. Ho Chi Minh was the leader of Vietnam, who was a communist, who formed the Vietminh. In 1949 the USSR exploded an atom bomb, which made the Americans feel very scared and threatened, because now the USA was no longer the only nuclear power, because of that china became communist which made the USA spend $2 billion supporting anti communists. As a result of that the president of Vietnam, Truman Doctrine, came up with containment, so the USA was going to contain the spread of communism. The French were giving money ($500 million) ...read more.

As a result of that John F. Kennedy became president so he increased the number of military advisers from 100 to 1600 by 1963 he also helped to equip the south Vietnamese army, because of that the strategic hamlet programme happened. This was where the peasants from the Vietcong, Diem had organised a system where the whole villages were moved into different camps known as fortified villages. This policy did not work, as the peasants did not want to be removed from this land. The policy played into the hands of the Viet-Cong who were promising the peasants more land once the communism have taken the root in the south, because of that Diem's unpopularity was so good, the south Vietnamese army overthrow and killed him. In the south the confusion was at a political level and the abuse of the peasants rights within the south. ...read more.

The biggest reason America became involved was because they didn't like the thought of communist spreading. Even though it was never actually classed as a war, It probably could've been prevented or handled in a different way. A response that the war got from most people was "It was never meant to be, If people were designed with a threshold, it wasn't meant to be exceeded". Maybe if America didn't get so involved, so many people wouldn't have died but then again, maybe if America didn't get involved, more countries around south-east Asia would fall to communism. Overall, the Vietnam war was very powerful, many people died and there were a lot of opinions on it. None of which you can say were right or wrong but America were very involved in Vietnam, Probably for many different reasons but mainly to stop the spread of communism. ...read more.