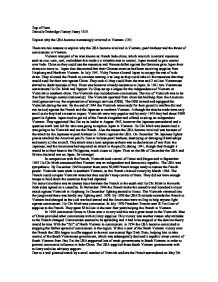 Explain why the USA became increasingly involved in Vietnam.

Top of Form Danielle Trubridge History Essay 10JH Explain why the USA became increasingly involved in Vietnam. (10) There are two reasons to explain why the USA became involved in Vietnam, pearl harbour and the threat of communism in Vietnam. Vietnam was part of an area known as French Indo-china, which was rich in natural resources such as rice, corn, coal, and rubber this made it a valuable area to control. Japan wanted to gain control over Indo- China so they could use the resources and Frances defeat against the Germans gave Japan their chance to move in. Japan also discovered that their Chinese enemies had been receiving supplies from Haiphong and Northern Vietnam. In July 1941 Vichy France allowed Japan to occupy the rest of indo china. They allowed the French to continue running it as long as they could take all the resources that they would need for their war against China. They took all they could from the area and 2 million Vietnamese starved to death because of this. There was however already resistance to Japan. In 1941 two Vietnamese communists Ho Chi Minh and Nguyen Vo Giap set up a league for the independence of Vietnam or Vietminh in southern china. ...read more.

Mao of China provided other communists with military supplies. This victory was another reason why attitudes to the French changed. Communism seemed to be spreading and it had to be stopped or the domino theory would be true. With the "fall" of North Vietnam to communism in 1954 the USA became committed to stopping the further spread of communism in the region. Within a year of the North Vietnam victory over the French the USA began to offer support to the anti communist Ngo Dinh Diem, helping him to take control of the South Vietnamese government, which was subsequently declared a republic wrest control of South Vietnam from Bao Dai the USA supported lots of weak governments in South Vietnam in order to prevent communist influence in Indo-China. The USA supplied these South Vietnam governments with military and also advisory support. Due to a well planned attack by a small number of Vetminh soldiers the French surrendered on May 7th 1954. The French asked President Eisenhower to send some American troops to help and there was even talking of nuclear weapons but Eisenhower said no to both. This was because America had just ended their war in Korea where 40,000 Americans had died and did not want to see this happen again in Vietnam. ...read more.

The new president Lyndon Johnson was keen also to show he was tough on communism. They became completely involved when the South Vietnamese army had no power to fight unlike Vietcong who had amazing morale. In 1964 the USA began their plans to bomb North Vietnam. They needed information on anti aircraft systems so they sent the south Vietnamese commando's to find out. These commando's attacked the radar stations in the Gulf of Tonkin. North Vietnamese torpedo boats headed straight for the Maddox but did not destroy it. Johnson said that the USA would strike back. Johnson realised that Vietcong would be impossible to beat using the South Vietnamese army. The president gave his approval to "operation rolling thunder" this meant to bomb north Vietnam on regular basis. By the end of the year there would be 200,000 of them. America's war had begun. In conclusion to this it shows that America were very reluctant to become involved, but gradually they had no choice especially when they discovered that the south Vietnamese army could not defeat Vietcong, America had to become involved if they wanted to stop communism from spreading. America was also reluctant to become involved as they had just fought in the Korean War and lost a lot of men, but again America had no choice when South Vietnam failed to defeat Vietcong. ...read more.