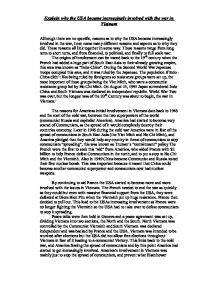 Explain why the USA became increasingly involved with the war in Vietnam Although there are no specific, reasons as to why the USA became increasingly involved in the war, I can name many different reasons and aspects as to why they did. These reasons all link together in some way. These reasons range from long term to short term, and from financial, to political, and finally to full scale war. The origins of involvement can be traced back to the 19th century when the French had added a huge part of South East Asia to their already growing empire, this area was known as "Indo-China". During the Second World War Japanese troops occupied this area, and it was ruled by the Japanese. The population if Indo-China didn't like being ruled by foreigners so resistance groups were set up, the most important of these groups being the Viet Minh, who were a communist resistance group led by Ho Chi Minh. On August 15, 1945 Japan surrendered Indo China and South Vietnam was declared an independent republic. World War Two was over, but the longest was of the 20th Century was about to begin, the war in Vietnam.' ...read more.

This links back to the cold war, and America fearing the spread of communism and by this point America had started to get increasingly involved. America's involvement in Vietnam was mainly just to stop the spread of communism, and prevent what Eisenhower named "the domino theory" in l954. This was that of Vietnam turned communist, then the neighbouring countries (Laos, Cambodia, Thailand, Burma, Malaysia and then Indonesia) would also fall to communism. South Vietnams new leader (Ngo Dinh Diem) was seen as a harsh, unpopular leader by the majority of south Vietnams population, yet the USA supported him as much as they could; because he was anti-communist. Now politically involving themselves with the war. The Ho Chi Minh trail was set up from 1950-1960, which was a way of transporting supplies from North To South (this was aid from China and Russia). By 1960 the National Liberation Front was set up, this was a Communist party with plans to overthrow Diem, remove the Americans from Vietnam and then re-unite Vietnam which was very bad news for the Americans, because Vietnam would be united as a communist nation. In 1960 John F Kennedy became the new US president and he made sure that the American population knew that he was tough on communism, and would do everything in his power to stop the spread of it, to "contain" it. ...read more.

believe that it was a long chain of several reasons which all linked together for example, If there was no Cold War then there wouldn't have been fear of communism to start with, and there may have been no war. The domino theory also played a huge part as this all stemmed from the fear of communism, and linked to the beginning spread of communism through Russia, Vietnam and China. Arguably when America started supporting the French financially, they were always prepared to stop communism in any way they could for once America had reached a certain level of involvement there would have been no way to stop the war from happening. I see the Gulf of Tonkin as the spark, the event that made the war in Vietnam a full scale military operation. If there was no formation of the Viet Minh then there may have been no spark to start the war 25 years larer As I have explained all the reasons I have mentioned are all of equal importance, one would not have happened without the other and therefore there can't be one overall reason why America entered the war, but I believe once America started to get involved there was no stopping what happened, happening. Mike Hadfield ...read more.