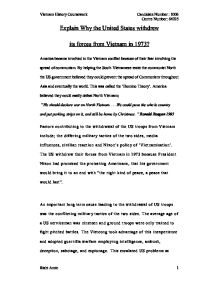 Explain Why The USA Withdrem its Forces From Vietnam in 1973

Explain Why the United States withdrew its forces from Vietnam in 1973? America became involved in the Vietnam conflict because of their fear involving the spread of communism. By helping the South Vietnamese resist the communist North the US government believed they could prevent the spread of Communism throughout Asia and eventually the world. This was called the 'Domino Theory'. America believed they could easily defeat North Vietnam; "We should declare war on North Vietnam. . . .We could pave the whole country and put parking strips on it, and still be home by Christmas." Ronald Reagan 1965 Factors contributing to the withdrawal of the US troops from Vietnam include; the differing military tactics of the two sides, media influences, civilian reaction and Nixon's policy of 'Vietnamisation'. The US withdrew their forces from Vietnam in 1973 because President Nixon had promised the protesting Americans, that his government would bring it to an end with "the right kind of peace, a peace that would last". An important long term cause leading to the withdrawal of US troops was the conflicting military tactics of the two sides. ...read more.

Napalm stuck to the skin and caused horrific burns. The morale of US troops worsened as they saw the devastating effects. This led to public outrage and US citizens began to question the war. The effects of the chemicals on US troops created resentment and hence led to their withdrawal. They were no longer fighting to resist communism but to kill. The cost of fighting the war totalled $168.1 billion, with the eventual cost estimated at $600 billion. For each Vietcong member killed, it cost $400,000. Tax money was being wasted on a worthless cause. Support began to fall and protests for the removal of troops developed by 1967. For example, 3,000 students gathered at a college to protest about the war, ending with 4 non-protesters being shot dead. The rising numbers of US casualties was also concerning. By 1967, 160 soldiers were killed a week. The death tally, ludicrous cost of the war and brutal tactics made US troops question why they were fighting war. This led to another long term decisive factor which was to play an integral part in the withdrawal of US troops - the media. ...read more.

Help was promised if this did happen. Written in January 1973, in a letter to president Thieu, Nixon claimed "You have my assurance that we will respond with full force should the settlement be violated by North Vietnam." However, when the war resumed only supplies were sent. Within a year Saigon fell and by 1976 North and South Vietnam became a single communist country under the rule of Ho Chi Minh. The American policy of containment had failed. The conflicting military tactics of the two sides was the most important cause for the withdrawal of US forces. If there been a series of pitched battles, the war would have been won by the US within months. However, the Vietcong's successful use of Guerrilla warfare prevented this. Their use of the Jungle was too great for the US soldiers to defend against as it was unfamiliar terrain and the Vietcong used this advantage effectively. Frustration was building up for US troops because the lack of support from the South Vietnamese, who they were fighting for, allowed the Vietcong to hide amongst the villagers undetected. This frustration culminated in atrocities and massacres by some US troops which was broadcasted all over the world causing great embarrassment for America. Ultimately, the poor US tactics led to the withdrawal of their forces in 1973. ...read more.