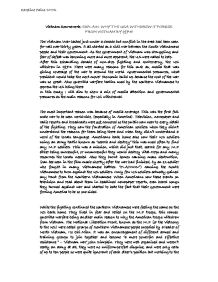 Explain why the USA withdrew its forces from Vietnam by 1973?

Vietnam Coursework: EXPLAIN: WHY THE USA WITHDREW IT FORCES FROM VIETNAM BY 1973? The Vietnam War lasted just under a decade but conflict in the area had been seen for well over thirty years. It all started as a civil war between the South Vietnamese people and their government. As the government of Vietnam was struggling and fear of defeat was becoming more and more apparent, the US were called to help. After this exhausting decade of non-stop fighting and controversy, the US withdrew in 1973. There were many reasons for this such as, media that was giving coverage of the war to around the world. Governmental pressures, what president would take the next move? Economic build up because the cost of the war was so great. Also guerrilla warfare tactics used by the southern Vietnamese to oppress the US being there. In this essay I will aim to show a mix of media attention and governmental pressures as the main reasons for US withdrawal. The most important reason was because of media coverage. This was the first full scale war to be seen worldwide, (especially in America). ...read more.

As the soldiers stepped off the planes, half way around the world, the body bags of fellow soldiers were loaded on. And at only an average age of nineteen years old, being so far away from anyone they really loved caused their minds to ask why they were really there. Both soldiers and American publics no longer understood what they were fighting for and whom they were fighting for. But when one hundred and nine innocent Southern Vietnamese people were murdered at My Lai the Americans saw the pointlessness of giving into this evil cycle of killings. Media coverage again showed, sometimes live, on television broadcasts this brutality. The protests for peace now turned into riots causing the government to re-think sending more troops. At this time withdrawal was no option but was now starting to look as optimistic as ever. This now links with governmental pressures being a main cause in the chain of withdrawal reasons, they had to step in. L.B Johnson was a president who didn't keep his public promise; he sent more troops to fight when they weren't necessarily needed. Americans saw him as more of a "fool" than a worthy president. ...read more.

In Conclusion: To conclude I am going to answer the title question with media coverage and governmental pressures being the reasons why the US withdrew its forces from Vietnam by 1973. The reasons for me choosing both are because I think media triggered off pressure in the government of America. It showed the people of the US what was going on, with uncensored news reports being shown around the clock. This turned peoples view into bitter hatred toward the US soldiers being out there so the government had to step in to control the situation. By electing a new president the US could try to balance money and troops as well as start to propaganda-rise its media attention to sway Americans attention to what good they were actually doing. Thanks to the power of cinema and film a worldwide public can see what really happened, even if it is glittered up for Hollywood the truth still comes out. For instance when I saw the film "PLATOON", it made me realise the true extent to the soldiers frustration of not understanding a great deal about what they were doing out in Vietnam, not to mention because they didn't understand a word of the Southern Vietnamese language. Senseless violence was the only alternative so the media latched on to it and showed the American public causing uproar. ...read more.