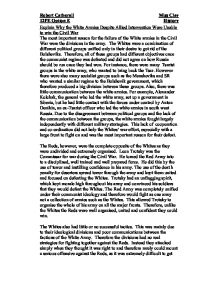 Explain Why the White Armies Despite Allied Intervention Were Unable to win the Civil War The most important reason for the failure of the White armies in the Civil War were the divisions in the army. The Whites were a combination of different political groups unified only in their desire to get rid of the Bolsheviks. Therefore, all of these groups had different objectives once the communist regime was defeated and did not agree on how Russia should be run once they had won. For instance, there were many Tsarist groups in the white army, who wanted to bring back the Tsar. However there were also many socialist groups such as the Mensheviks and SR who wanted a similar regime to the Bolshevik government, which therefore produced a big division between these groups. Also, there was little communication between the white armies. For example, Alexander Kolchak, the general who led the white army, set up a government in Siberia, but he had little contact with the forces under control by Anton Denikin, an ex-Tsarist officer who led the white armies in south west Russia. Due to the disagreement between political groups and the lack of the communication between the groups, the white armies fought largely independently with different military strategies. ...read more.

Trotsky kept his army well organised and unified using terror tactics as mentioned before to keep his army together and focused on defeating the Whites. Trotsky had entire control over his army therefore he could effectively organise the overall tactics of the army, whereas no one in the White Army could. This was a considerable disadvantage to the Whites and a large reason for their defeat as the Whites could not use there soldiers to their full potential as each factions would fight on there own whereas Reds fought as one army. Another big reason for the Whites being unable to win the Civil War was that they found it extremely difficult to conscript peasants. Without the support from peasants the Whites would have a considerably smaller army and therefore it would extremely weaken their war effort. The peasants would not join the White Army as they believed that their newly acquired land that they had been given to by the Bolsheviks would be taken back by the government which would be set up once the White Army won. The Reds however, found it a lot easier to conscript peasants, as the peasants believed that they would be able to keep their land under Bolshevik rule. ...read more.

Overall I believe that the Allied support for the Whites actually was a greater support to the Reds than the Whites as the Allied support was very insignificant in their war effort and did last the whole Civil War whereas it did help the Reds to conscript more peasants and therefore gain a larger army. I conclude that there were many reasons for why the White Army were defeated in the Civil War by the Red Army. The ideological divisions of the White Army were the biggest long-term cause for the defeat and caused many additional problems for the White Army. The ideology of the factions of the White Army caused these divisions as each political had different views on how the army should be run. The divisions caused other long-term factors such as the poor communications and co-ordination between the factions, which on their own created even larger divisions between the factions than there were already was. Also the poor communications affected other short-term effects such as the poor tactics the Whites used and the poor equipment the Whites had, as the factions could not work together to make enough supplies or to create effective tactics. However the biggest problem the Whites faced was the superiority the Reds had of all of the above factors that meant that the Whites could not win the Civil War. Robert Catherall Miss Clay 12PE Option E History ...read more.