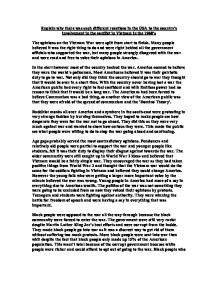 Explain why there was such different reactions in the USA to the country's involvement in the conflict in Vietnam in the 1960's.

Explain why there was such different reactions in the USA to the country's involvement in the conflict in Vietnam in the 1960's The opinions on the Vietnam War were split from start to finish. Many people believed it was the right thing to do and were right behind all the government officials who supported the war, but many people strongly disagreed with the war and were read and free to voice their opinions in America. In the start however most of the country backed the war. America seemed to believe they were the world's policeman. Most Americans believed it was their patriotic duty to go to war. Not only did they think the country should go to war they thought that it would be over in a short time. With the country never having lost a war the American public had every right to feel confident and with limitless power had no reason to think that it would be a long war. The Americans had been forced to believe Communism was a bad thing, so another view of the American public was that they were afraid of the spread of communism and the 'Domino Theory'. Buddhist monks all over America and anywhere in the south-east were protesting in very strange fashion by burning themselves. They hoped to make people see how desperate they were for the war not to go ahead. ...read more.

Hippies were obviously against the war. They offered a different opinion to everyone else. Freedom, peace and love did not involve war surprisingly enough and the hippies were strongly against the war. Sit-ins and marches were held to protest but the hippies could not have a strong point due to the governments spin on their drug use. Lots and lots of women were against the war because they were the wives of the soldiers. When they saw what was really happening due to media coverage they wanted the war to be stopped and their husbands back. In the early sixties however despite all these groups opposing the war there was an overwhelming support for going to war. The public opinion quickly changed though in 1968 after the Tet Offensive. This was where the Vietnamese celebrated their national holiday a day early and then attacked American soldiers on the day of the holiday. This was a suprise attack and the US lost many soldiers in this attack. This humiliated the American government and they had now lost all credibility. The soldiers no longer trusted their leaders who told the Americans they were winning the war. Also back in America the public had lost all confidence in the government. Members of the government resigned saying America could no longer win the war and that morale was already at its lowest. ...read more.

The public opinion rocketed against the war due to disbelief of what their soldiers were doing. America was now not only unpopular in their own country they were unpopular all over the world. The hippies were becoming more widespread and had more of a voice towards the end of the 1960's because more people wanted to listen to them now. They were not getting confidence from the government so they had to get it for more unlikely sources. They held more protests, the most memorable outside the American embassy. Vietnam was also very expensive. the mass weapons and defoliants were not cheap to produce and they were being used frequently. People had to pay higher taxes, this made the government more unpopular and less people trusted them. Overall I don't believe all this affected the public opinion that much. In 1971 an opinion poll was held. They asked members of the public if they thought it was right to go into Vietnam. More people believed it was wrong but there was still a majority in favour of going to war. The final results were 60% in favour to 40% against it. This was a massive rise but still did not affect anything. Therefore overall I believe that the public opinion change was important but was not as important as it perhaps first seemed. I can understand why the American public were upset and could not trust the government but i believe the government was right to go into war. ...read more.