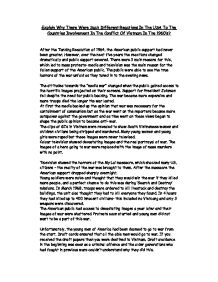 Explain Why There Were Such Different Reactions In The USA To The Countries Involvement In The Conflict Of Vietnam In The 1960's?

Explain Why There Were Such Different Reactions In The USA To The Countries Involvement In The Conflict Of Vietnam In The 1960's? After the Tonking Resolution of 1964, the American public support had never been greater. However, over the next five years the reactions changed dramatically and public support severed. There were 3 main reasons for this, which led to mass protests- media and television was the main reason for the fallen support of the American public. The public were able to see the true horrors of the war unfold as they tuned in to the evening news. The attitudes towards the "media war" changed when the public gained access to the horrific images projected on their screens. Support for President Johnson fell despite the need for public backing. The war became more expensive and more troops died the longer the war lasted. At first the media backed up the opinion that war was necessary for the containment of communism but as the war went on the reporters became more outspoken against the government and as time went on these views began to shape the public opinion to become anti- war. ...read more.

The American public had access to devastating images a year later and their images of war were shattered. Protests soon started and young men did not want to be a part of this war. Unfortunately, the young men of America had been doomed to go to war from the start. Draft cards ensured that all the able men would go to war. If you received the draft papers then you were destined to Vietnam. Draft avoidance in the beginning was seen as a criminal offence and the older generations who had fought in previous wars couldn't understand why they did this. The draft system was balanced in favour of white, middle class and educated Americans, but the public didn't realise. As the experiences for war were reaching the television screens, people began to help out friends, and family- they continued with education, made up medical reports and some escaped from America. It was obvious the public support was falling. The draft system created resentment towards the government therefore the support fell. ...read more.

The climatic protest of 50,000 people turned into a violent riot, which lasted for two days in Washington. It was a portrayal of how much the American government had lost public support in the course of a few years. Even when Johnson was pulled out of office and Nixon appeared to be doing his job, the protests carried on, especially when America invaded Cambodia. In Kent State University, Ohio, hundreds of students were protesting and couldn't be dispersed so guardsmen were called in. They shot at unarmed students and released tear gas- 4 students were killed and 1 was paralysed. In conclusion, it was the media and television that had moulded the American publics reaction, especially after what came clear about the massacre of My Lai. It gave the reality of the situation after it became obvious the war wasn't to be won after the Tet Offensive. If television hadn't been invented then the public wouldn't have known the full graphical horrors which resulted in protest and young men burning their draft cards. Due to this American support fell, which eventually put a stop to the war. ...read more.