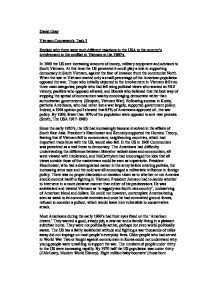 Explain why there were such different reactions in the USA to the country&amp;#146;s involvement in the conflict in Vietnam in the 1960&amp;#146;s.

David Gray Vietnam Coursework: Task 3 Explain why there were such different reactions in the USA to the country's involvement in the conflict in Vietnam in the 1960's. In 1960 the US sent increasing amounts of money, military equipment and advisors to South Vietnam. At this time the US perceived it could play a role in supporting democracy in South Vietnam, against the fear of invasion from the communist North. When the war in Vietnam started only a small percentage of the American population opposed the war. Those who initially objected to the involvement in Vietnam fell into three main categories; people who had left wing political views who wanted an NLF victory; pacifists who opposed all wars; and liberals who believed that the best way of stopping the spread of communism was by encouraging democratic rather than authoritarian governments. (Simpkin, Vietnam War). Following success in Korea, patriotic Americans, who had never lost a war largely, supported government policy. Indeed, a 1964 opinion poll showed that 85% of Americans approved of...the war policy. By 1969, fewer than 50% of the population were opposed to anti-war protests. (Smith, The USA 1917-1980) Since the early 1950's, the US had increasingly become involved in the affairs of South East Asia. President's Eisenhower and Kennedy supported the Domino Theory, fearing that if Vietnam fell to communism, neighbouring countries, which had important trade links with the US, would also fall. ...read more.

He also criticised the government for 'taking young black men who had been crippled by our society...to guarantee liberties in South East Asia which they had not found in South West Georgia or East Harlem...Negro and white boys...killed together for a nation that has been unable to seat them together in the same schools.' Until the mid 1960's, critics of American policy in Vietnam had been few and even these were discounted as being liberal, disloyal pro-communists. The growing influence of the number of US casualties, the horror of the war relayed each evening on colour televisions in homes nationwide, the draining of funds from Johnson's 'Great Society' programme and the racial overtones of the war made the anti-war movement 'respectable' and one that Washington could not ignore (Harriet Ward, World Powers in the 20th Century) the Revolt of the American Establishment, the University presidents, the Lawyers, the bankers, the corporation heads, who are the articulate elite of 'middle America'. Senators J. William Fulbright and Robert Kennedy, foreign policy experts George Kennan and Walter Lippmann, Dr. Benjamin Spock and Dr. Martin Luther King JR. encouraged hundreds of thousands of Americans to participate in antiwar marches and demonstrations to Washington in 1967 (J.McLeary, Modern World History). By the spring of 1968 they were convinced that victory in Vietnam was not worth the immense social cost (300 Americans dead a week) and the immense financial drain ($30,000million a year)(Alistair Buchan, The Observer). ...read more.

By now the American at large, not just students, deserters and draft dodgers were becoming disenchanted by the war. Congress had ignored its constitutional duties throughout the Vietnam War, legislating merely on domestic matters. The President had formulated foreign policy. Once public opinion became markedly anti-war, Congress began to assume its authority, declaring that no funds appropriated for military purposes could be used to widen the war, expressly forbidding the use of ground troops in Laos and Cambodia. Te war had polarised and even the middle ground of ordinary Americans had reached the conclusion that winning the war was impossible. President Johnson's promise of a 'Great Society' was vanishing. The money needed for social justice had been spent on the Vietnam War and angry black Americans and college-aged youth turned to violence to hasten social change. LBJ faced 1968, the election year, in disarray. Violent protests in many black ghettos in US cities led many to believe that troops would be needed to stop revolution in the US. In 1970, universities in America exploded as President Nixon extended the war by attacking Cambodia. At Kent State University, the National Guardsman fired a volley of shots that killed four students and wounded nine others. The protests against the student deaths spread to other universities and two more students were killed, shot by the Police. This was the final catalyst in turning public opinion against the war in Vietnam. ?? ?? ?? ?? ...read more.